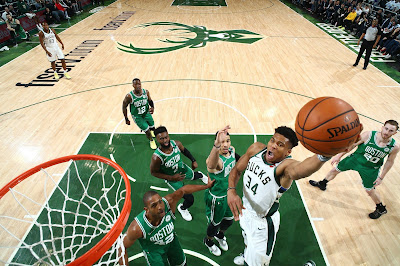 The Celtics missed a golden opportunity to leave Milwaukee with a two-game lead, as the Bucks looked more like themselves in Game 2, knotting up this Eastern Conference semifinals series 1-1 after a 123-102 blowout win at the Fiserv Forum on Tuesday night.

Giannis Antetokounmpo bounced back from his poor 7-of-21 Game 1 performance, to lead all scorers with 29 points to go along with 10 rebounds and 4 assists for the Bucks. Khris Middleton scored 28 points, while shooting a career-high 7-of-10 from behind the arc.

Milwaukee as a team hit a franchise playoff record of 20 3-pointers to hand the Celtics their first road and overall loss of the postseason.

Eric Bledsoe got going after being held to only six points on Sunday, netting 21 points and dishing out 5 assists


"I think that's more what we're accustomed to seeing," said Bucks coach Mike Budenholzer. "I liked our spirit, our activity, our competitiveness all up and down the roster. Giannis and Khris and Bled really set a tone. We need to capture that, take it to Boston with us and play that way up there."

Antetokounmpo, Middleton and Bledsoe combined for 78 of the Bucks 123 total points, as all three collectively hit 24-of-46 from the field.

Marcus Morris, who got the start for the second straight game, led the Celtics with 17 points and 7 rebounds. Jaylen Brown finished with 16 points and 6 rebounds, while Al Horford was one of the few bright spots for Boston, recording 15 points and 8 rebounds in the loss.

The Bucks led 59-55 at intermission after a back and forth first half only to use a 24-2 run in a seven minute stretch to end the third quarter and take a 93-73 lead into the final frame.

Kyrie Irving, who had 26 points and 11 assists on Sunday afternoon, never got into an offensive rhythm in Game 2, going 4-of-18 for a total of nine points.


"They did a great job of switching tonight and forcing me left," Irving said. "I started the game off well getting downhill and setting an example for my teammates of how we want to play. I just didn't put my stamp on that."

Milwaukee outscored the Celtics 39-18 in the third and led by as many as 31 points in the fourth quarter, while holding Boston to 39.5 percent shooting for the night.

The Celtics will look to re-gain focus as the series shifts to the TD Garden on Friday night.


"Obviously, we'll have to look at the film and see what we can do better," said Al Horford. "You have to give them credit, they responded … Now we have an opportunity at home on Friday to take the lead again in the series, and we'll have to be even more focused for that game."

Celtics lost the battle on the glass for the first time in the playoffs, as the Bucks out-rebounded Boston 59-52. Pat Connaughton (11), Antetokounmpo (10),  Nikola Mirotic (9) and Middleton (7) lead Milwaukee with the most boards.