Marcus Smart is proving why he's worth every penny 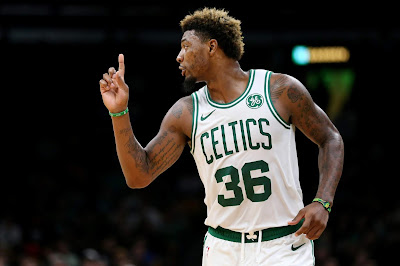 Where would the 2018-19 Celtics be without Marcus Smart?

He's the glue that holds the team together and the defensive anchor who can challenge opposing guards like no other Celtics player.

One factor that potentially explains Jaylen Brown's decline on defense is the fact that he primary guards shooting guards, the league's grown faster in its pace of play while Boston hasn't. Throw in Kyrie Irving, who's never been known for his defense and an ailing Al Horford and you got yourself a recipe that allows disasters like a 29-point game from Trey Burke -- which was enough for Brad Stevens to make a drastic change to his starting lineup, following a 117-109 loss to the Knicks the night before Thanksgiving.

Burke has only scored in double-digits once since then. And Stevens hasn't gone back to the lineup of Kyrie Irving, Jaylen Brown, Aron Baynes, Al Hoford and Jayson Tatum since Burke's career night.

When the struggling Brown was sidelined with a tailbone injury, Stevens turned to Smart to play next to Irving in the backcourt against the Pelicans -- a team ranked second in the league in scoring (116.7). Smart radically altered not just how Boston defended but added a much-needed layer of character, grit and vigor to their approach.

The Celtics, a team ranked second in the league in defensive rating, have struggled this season with opposing play-making guards prior to Smart being in the starting lineup. But lately, it's been Smart's offense that has turned heads.

In the last nine games, Boston's offensive rating ranks first in the league (120.6), topping the Warriors, Tralblazers and 76ers. What's even more startling is Smart is beginning to shoot the ball well; something he's never done consistently throughout his career.

How long does Smart need to shoot 35 percent from downtown (his average since being inserted into the starting lineup) until we can fully do-away with the Tony Allen comparisons? Smart has been the Celtics' MVP, not only because he does the dirty work, or the little things that don't show up in the box score. Quite the contrary, on some nights his point totals are into the high double-digits.

But where he really widens our eyes is his steals (2.8), assists (4.8) and rebounds (3.1). He stalks the floor, showing a real nose for the ball. You're never safe from Smart's arms that are willing to pounce at any given moment and his offensive production that turned the Celtics into the hottest team in the NBA.