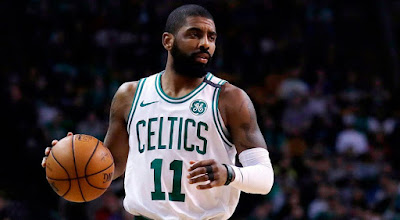 With a five-game winning streak on the line, the Celtics will have to take on the Pelicans with a very thin roster.

Following Monday's injury report, the Celtics may have to compete with only 10 active players when they take on New Orleans at TD Garden on Monday. Aron Baynes (left ankle), who is expected to be out for an extended period of time while he nurses his left ankle, will once against most likely sit out alongside Al Horford (left knee), who is listed as doubtful for Monday's contest.

The two big men missed out on Saturday's blowout win against the Bulls and will be accompanied by their point guard Kyrie Irving, who is ruled out due to right shoulder soreness. Irving, who took a blow to his shoulder in Thursday night's win against the Knicks, will have the night off and Gordon Hayward (illness) is considered doubtful.

He's under the weather and will probably not be playing. Guerschon Yabusele, who suffered a right ankle sprain in the late minutes of Saturday night's win, will also sit and is expected to be out for while, according to Brad Stevens.

With Hayward and Horford being the only two out of five players mentioned as doubtful, this is a big blow for a team taking on All-Star big man Anthony Davis and the Pelicans. For starters, Boston will have to take on Davis without two of its best defensive big men and if Hayward can't give it a go, it leaves Stevens with an thin 10-man roster that rounds out with Brad Wanamaker and two-way player PJ Dozier.

As expected, rookie Robert Williams III has been called up from the G-League for Monday's game to help the very thin front court. Look for him to see big minutes for defensive purposes against Davis and the rest of the the Pelicans' front court. He's played a total of 34 minutes in nine games this season but is averaging nearly one block per (0.7).

The Celtics will have to cohere to the New England Patriots' "next man up" mantra in hopes to keep their winning streak alive.