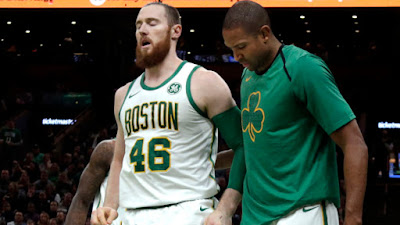 Celtics center Aron Baynes has been ruled out for Saturday night's game against the Bulls.

Baynes, who sprained his left ankle against the Knicks Thursday night at TD Garden, has progressed since then, according to Brad Stevens, but still isn't healthy enough to play. No timetable has been set for his return.

After playing only two minutes in the first half against New York, Baynes suffered the injury underneath the hoop and was immediately helped off the floor and into the locker room. Stevens will turn to Daniel Theis and Semi Ojeleye in the front court for short-term relief.


Meanwhile, Al Horford was a late addition to the Celtics injury report. He's considered questionable due to left knee soreness.

If the veteran big man is unable to give it a go, it'll be interesting to see which direction Stevens decides to go in, considering the Bulls' lineup -- which features Zach Lavine and Lauri Markkanen, a 7-foot outside shooter -- is now at full strength. In the event Horford sits, the Celtics could go smaller and turn to Ojeleye for his perimeter defense or go big and insert Theis.

The Celtics will look to stretch their winning streak to five games when they take on the Bulls while Chicago hope it can win the back end of a back-to-back, following its 114-112 win over the Thunder.