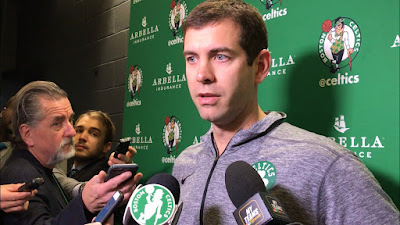 It gave his players an opportunity to open up with each other and reflect on the team's shortcomings and although the timing of the team meeting wasn't ideal -- Stevens preferred for his team to wait until the media exited the locker room -- Stevens thinks his players may not have been as honest with each other in that moment if they had decided to wait.


"I know everybody here has got a job to do and so does one of the coaches that was in there after you guys were done with the media, I wish we could have gotten out of there quicker," Stevens said. "But it's probably better to have that transparent talk in the locker room amongst us prior to meeting with everybody with a recorder.

"But those are moments, and it's interesting because every time I read about a team meetings, it's like 'Yeah, everybody has team meetings all the time.' Everyday we have a closed door meetings but some are obviously more impact-full, more transparent and a little bit more raw than others and I think those are probably the most memorable, enjoyable and purposeful times when you reflect back on the season."

When asked if Stevens thought the loss against the Bucks was the focal point of the meeting, the Celtics head coach replied that he thinks it had a lot to do with issues that were already brewing prior to Friday's matchup.


"I think that the game is a part of everything," Stevens explained. "We didn't play the way we wanted to play in either of the last couple of games. We've had our moments, we've had our ups and downs but there's never a right or wrong time (to have a meeting) and ultimately if you're on a team with 15 people that have good intentions and are willing to share what they're thinking, what they're seeing and what they're feeling, that's a pretty good place to start."

As a coach, do you chime in on a player's meeting or do you wait it out and add your opinion at a later time?


"The best thing you can be is a listener, as long as you can be a listener. I always say a lot of those meetings start off like Festivus," Stevens jokingly added. "And they end with like hugs, right? And so it's just like any other family meeting. That's where we were, we never got to the feats of strength and it just ended"

In the aftermath, Stevens isn't showing any signs of concern and believes in his players. The conversation picked itself back up Saturday between him and his team and believes his team's heads are in the right place.

By his estimation, they're just going through a rough patch -- the result of a losing streak -- but their intentions are where they need to be.


"To be quite candid, we walked out of there and said 'we're going to continue this tomorrow,' Stevens said. "We spent another hour and a half yesterday -- again, those are the moments in coaching you can't explain, that's what it's all about, if it's well-intention-ed and if it's not off the rails. It was the furthest from that. Our guys are great. We just haven't played as well as we want."