Jaylen Brown scolded by teammates in first half vs Pelicans 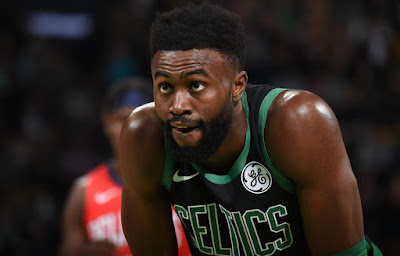 For Brad Stevens, there's still much to be desired.

The Celtics, a team on the up and up, riding high on a six-game winning streak, is finding upward momentum of late but what Stevens has been preaching since the start of regular season and is truly searching for is consistency. Following Monday night's 113-100 win over the Pelicans, he reflected on what he saw early on and commended his team for its recent improvement but is still looking for the same level of effort throughout an entire 48-minute game.


"I thought we had some really good moments early (in the season), they were just -- they weren't consistent," Stevens said. "It's been better in the last few games. The other night we played a full game, we played hard for a full game and I think we've been closer to that but tonight we made some mistakes. But we played hard again. You gotta keep doing it, 26 games in. We'll evaluate our consistent effort at the end of 82 but it wasn't as good as it needed to be in the first few games."

We've certainly seen a change in the Celtics' approach. Last week, Kyrie Irving complimented his teammates for their newfound level of focus and team-first attitude.

The Celtics held each other accountable, cheering when appropriate and correcting one another when necessary. Monday night featured the latter, just before the second half.

When Jaylen Brown botched an offensive play just before halftime, Terry Rozier scolded the shooting guard and so did Marcus Morris minutes later when Brown misread a back screen and failed to cut to the basket just before the shot clock expired. From an outsider's point a view, it looked as if frustrations boiled over and that Rozier and Morris may have been a bit too harsh with Brown but in hindsight, it may have been just what Brown needed.

Brown caught fire in the second half -- where the Celtics created enough separation to run away with the victory, despite Anthony Davis' 41 points. Brown scored 11 of his 19 points after halftime, including two fourth-quarter 3-pointers that put the Pelicans away for good.


"I think as guys have gotten more comfortable playing together and the ball has gone in a little bit more, you feel a little bit better about yourself," Stevens explained. "You play happier, you play freer, I think all that stuff kind of adds in to making that one extra step of effort."

The continuity has created a level of comfort between players who are no longer afraid to speak out against one another in a positive light -- constructive criticism, if you will. It's a good thing.

Irving called them "championship habits" -- behavior that was foreign to this year's Celtics team less than a month ago. Now, they've moved on from the days of less passing and more isolation dribbles, more shooting and less ball movement and accountability over quiet leadership.

What's jarring is the Celtics are demonstrating these characteristics without Irving -- their leader. Donned in street clothes and standing up throughout most of the night, Irving did everything from cheer, coach and laugh with his teammates -- which kept a well-balanced ambiance on the bench.

There's no telling when Irving will return to the floor, if he'll be available Wednesday night for a matchup in Washington D.C. against the Wizards but either way, the Celtics will hope to continue to take steps towards the right direction, find consistency and stretch their winning streak to seven games.