The Past, Present and Future of Terry Rozier 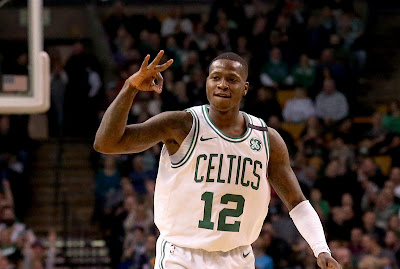 Celtics backup point guard Terry Rozier is one of the most interesting conversation points of the young NBA season. Amidst a restricted free agent contract year, he is stuck firmly in the middle as to one of the reasons why the Celtics have struggled for much of the beginning of 2018-19 campaign.

To truly understand Rozier's predicament we have to look at the whole picture and what's going through his mind today.

The year was 2012 and Terry Rozier was ranked No. 74 in the country by ESPN and as the 12th best ranked point guard in his class. Coming out in the same year as Marcus Smart would head to Oklahoma State, Rozier decided to jump the Ohio border and head to the University of Louisville, where he would team up with coaching great Rick Pitino to grow his skill set into being one of the best scoring point guards in college basketball for the next two years.

Rozier's freshman campaign was a successful season in which he would make the ACC All-Freshman team but post modest numbers in 7 points and 3 rebounds per game. Rozier’s breakthrough would happen during his sophomore season in which he averaged 17 points per game and made the All-ACC Second team. Rozier would declare for the NBA Draft at the conclusion of that season.

The Celtics selected Rozier as the No. 16 overall pick in the 2015 NBA Draft, where many projected at the time he would go, but some believed it was a bit higher than he should have been taken. In addition, most Celtics fans ended up confused as to why Boston had drafted yet another point guard. The team had already two true point guards in Isaiah Thomas, Marcus Smart and with Avery Bradley serving as another undersized addition to the group.

With an already crowded backcourt, the Celtics would end up sending Rozier to Portland, where he would suit up for the Red Claws the majority of his rookie season. Rozier would only feature in 39 games for Boston during the 2015-16 campaign. In that time he would only break double digit scoring for the Celtics on one occasion all year long.

The beginning of Rozier's success as a Celtic would occur in the middle of November during his sophomore NBA season. Rozier would break double digit scoring marks twice in one week that month and would eventually start to work his way into Brad Stevens' nightly rotation. Rozier finished averaging 5.5 points and 3 rebounds in 74 games played during the 2016-17 campaign.

Terry Rozier was firmly in the team's plans entering the 2017-18 season, especially since Ainge traded Isaiah Thomas and Avery Bradley prior to to the start of training camp. The Celtics slated Rozier as one of the top three options off of it's bench. Rozier's success would start early and only increase as the season progressed.

Rozier would go on to start 16 games over the course of the season, while averaging over 11 points per contest for the year. His success carried into the postseason, as he would start all playoff games for the injured Kyrie Irving. Rozier would come to earn the mantra "Scary Terry" with his athletic and explosive style during the Celtics' run to Game 7 of the Eastern Conferance Finals.

Fast forward to today, we all stand here wondering why Terry Rozier has elected to go off script when it comes to the Celtics' game plan, thus far after 23 games. Many analysts and fans have turned Rozier into one of the culprits for why the current season has been average at best, as the C's record stands at 13-10.

However, I remind you that the story of Terry Rozier gives us insight into why he may be doing things this way. Scary Terry has always been one to bet on himself. From Shaker Heights to Causeway Street, he has always faced a challenge with his best efforts, while carrying a chip on his shoulder, and having an eye on the long term prize.

I for one cannot blame him for going off script when it comes to the Celtics and Brad Stevens this season. Rozier faces and uncertain future as a restricted free agent in the summer of 2019. From his perspective if he does not play up to expectations this year he will risk a major pay day on his next contract. Additionally, staying in Boston long term could also cost Rozier big money due to Kyrie Irving and the path to starting for the Celtics being closed off.

For Rozier to reach his goals and potential as an NBA star, it will require him to get starts which means his future ultimately lies elsewhere and not in Boston.

Let's keep in mind, Rozier also had the added benefit of watching his classmate Marcus Smart 'play nice' and have to take a team friendly deal in his restricted free agent year, because no team made a significant offer last summer. Plus, let's not forget Rozier experienced maybe the worst 'basketball is a business' reminder when it came to his former teammate Isaiah Thomas, the understanding is clear for Rozier that you need to worry about yourself first in today's fickle NBA.

Ultimately, Terry Rozier believes in himself and is already considering his role as a starting point guard in this league with other teams rumored to believe the same.

While 'the Celtics should trade Terry' is a topic that can be debated all day, in the end, it seems like the long-term future for the Louisville product will end up in a new uniform.