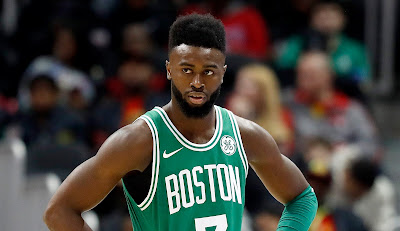 After missing three consecutive games, Celtics guard Jaylen Brown is prepared to rejoin his team on the parquet Thursday night at TD Garden.

Brown, who hasn't played in a game since suffering a lower back injury in Dallas last month, will return to the floor against the Knicks Thursday with his team in the midst of a three-game winning streak. Brad Stevens' new starting lineup featuring Marcus Smart and Marcus Morris is undefeated but Brown understands how important it is for his team to continue its upward momentum as it attempts to regain position in the upper echelon of the Eastern Conference.


"I'm expecting to keep going how it's been going," Brown said. "Smart and Morris have been playing extremely well and our team is looking completely different in the first initial start of the game so that's what I would expect. I haven't talked to Brad or anybody else, but whatever, however we can keep this going, playing the right way and continue to win, I'm 100 percent for it."

Unsurprisingly, Stevens was tight-lipped about which players will be starting Thursday. If at all, he tends to make that announcement hours before tip-off, if not, we'll find out minutes before the start of the game.

Either way, Brown isn't holding his breath in hopes he gets the nod. He understands the slow start (10-10) prior to the three-game winning streak was a setback the Celtics (13-10) are trying to rectify while trailing the league-leading Raptors by six and a half games.

Brown also thinks the starter/non-starter conversations is overrated, something his teammate Gordon Hayward, according to him, demonstrated Saturday night against the Timberwolves.


"I believe in my ability, the coaching staff believes in my ability, so I think coming off the bench, I think people make it a bigger deal than what it really is," Brown explained. "At the end of the day, it's basketball. Hayward came off the bench the other day and had 30 points. That's a mindset and that's a choice. Coming out and having the right mindset and coming out and playing basketball, letting it take care of itself."

If Brown does come off the bench, it will be the first time this season Stevens' wing didn't start a game he was available to play in.