Marcus Morris is having an All-Star caliber season 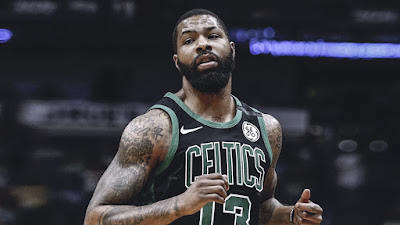 It's time for NBA head coaches to start taking a serious look at Marcus Morris before casting their vote for this year's All-Star reserves.

Morris has emerged into one of the Celtics' most reliable players and has recently taken his game to new heights. While finding consistency has been an ongoing problem for Brad Stevens this season, Morris has served as a safety net in the front court throughout the team's most challenging moments.

He's someone who is stacking up one impressive performance after another, has become Stevens' second-best clutch time player and is one of the biggest reasons why the Celtics are still a top-five team in the east, despite their underwhelming start, and not in the lower half of the Eastern Conference. Morris is in the midst of his best month of the season and isn't showing any signs of slowing down.

He's averaging 18.3 points while shooting 52.2 percent from the floor and pulling down 5.5 rebounds a night. His outside touch has also turned him into the team's best 3-point shooter, while shooting at a 44 percent clip on 6.2 attempts per game.

Stevens' adjustment to the starting lineup last month was the dramatic change his team needed following an embarrassing 117-109 loss at home to the Knicks, inserting Morris has been the biggest difference maker and he's been lighting it up ever since. Boston is 12-3 when Morris is in the starting lineup and Saturday night's 19-point comeback win over the Grizzlies was just another reminder of how important he is.

His 7 points in the final minutes, including a huge shot with under a minute left that gave the Celtics a six-point lead, was vital on the offensive end but there was also a key play down the stretch that crushed the Grizzlies' hopes of tying things up. With the threat of making it a one-possession game, Grizzlies guard Mike Conley drove to the rim before Morris deflected the ball off of Conley's leg, thus forcing the biggest Memphis turnover of the night. It was just another clutch moment for Morris but if you've been following the Celtics all season long you already know that coming up big at the end of game isn't new for him.

He's the same guy who drained the go-ahead 3-pointer that put the Thunder away in Oklahoma City earlier this year, forced overtime at the buzzer from behind the arc against the Suns in the Celtics' biggest comeback game of the year and has now added a key defensive stop to his list of clutch moments throughout the first two months of the season. Morris had a handful of similar moments throughout last year's run but this season we've seen him reach a new plateau -- one that is trending upwards and is on the cusp of All-Star level basketball.

The Celtics (21-14), a team that's currently four games behind the Raptors and Bucks for first place in the Eastern Conference, have an opportunity to crack the top-tier well before the All-Star break. And if they're able to, expect Morris to be a big part of that and force NBA coaches to consider him as the Celtics' second All-Star behind Kyrie Irving.

After Stevens was forced to keep Jayson Tatum -- who's averaging 5.5 points in his last two games -- on the bench in the fourth quarter of Saturday's win, Morris didn't disappoint. The Celtics will look to carry on their momentum into San Antonio for their matchup against the Spurs Monday night.