Rumors: Celtics have been 'hawking Anthony Davis for years' 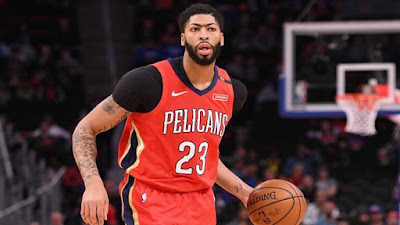 The rumors of a potential Celtics and Anthony Davis match continue to make headlines, despite a report last month that the Pelicans All-Star was "open" to a trade to Boston, no such move can happen this season until Kyrie Irving is either re-signed or traded.

But according to ESPN's Adrian Wojnarowski, Danny Ainge has had interest in Davis for quite some time now and no one should be surprised if the Celtics make a play for him come next summer.


"Boston has been hawking Anthony Davis for years, said Wojnarowski on the Woj & Lowe Podcast. "They always hoped that it would be—whether it's the end of this season or the beginning of next before the trade deadline—that they would gather up all those assets, all those picks Danny Ainge has, young players, and they'd be the team to be able to get Anthony Davis.

"But now you have L.A., and if they get shut out in free agency, they're going to have to take all their young players to try to use them to get Anthony Davis."

It's been documented that Irving and Davis, besides being friends, have talked about the possibly of teaming together in Boston.

The former 2012 No. 1 pick teamed up with Klucth Sports, the same agency that represents LeBron James, prior to the start of the 2018-19 campaign stirring up more rumors of Davis perhaps heading to the Lakers at some point.

However, New Orleans can still offer Davis the supermax of a five-year, $235 million contract next summer, if their star decides to opt out of his current deal in July.

The Celtics, who beat the Pelicans last week, have attractive assets that include draft picks, plus such players as Jayson Tatum and Jaylen Brown to offer for Davis. Either way, these rumors will not be going away anything soon.