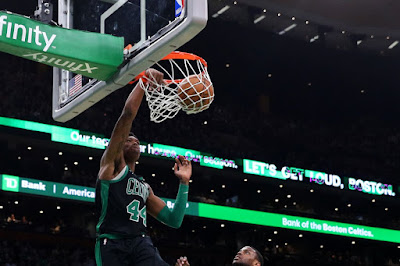 The first-round pick got his first taste of meaningful minutes Monday night at TD Garden, clocking in 25 minutes off the bench and put together an impressive stat line -- 11 rebounds, 7 points to go with his three blocks. But what stood out the most was his two swats against the best big man in the league.

Davis, who ironically leads the NBA in blocks per game, was denied in the paint after he gave Williams an up-fake but the Celtics rookie didn't bite. Instead, he blocked Davis and the surprised him again in the second half -- which was even more impressive, when Davis created space on a fade-away that was met by Williams' right hand.


"I thought he was going to go for the pump fake, and he didn't," Davis said. "I just tried to shoot over. He's good. He's talented. A good defensive player."

He added that Williams made plays on both ends of the floor, and that hard work will only make him a better player.


"He did a good job," he said. "I mean, he blocked some shots, got a couple dunks, plays hard. Keep working, he can only get better."


Williams, who admitted that he looked up to Davis throughout high school and college, explained that while it is his job to make plays on the defensive end, it was a special moment.


"Obviously, [it's] a confidence booster," he explained. "Still have a lot to work on."


"We he held him [Davis] to 41," Stevens said sarcastically. "No, I mean he's a load and it was really well-earned. Theis and Robert were basically going to have to play him one-on-one because we didn't want to double. We wanted to guard at the 3-point line. [Julius] Randle's a load down on the block so I thought Robert did a lot of good things. You know, when those guys -- when you're shooting jumpers and Robert's in the vicinity, you feel him.

"When you're shooting around the rim and he's in the vicinity, you feel him and I think he can improve a lot but I thought he did a really good job. And offensively, he was active, got some hands on some offensive rebounds, made a couple tip-ins, kicked it out. I thought he was good."

Marcus Morris, who led the Celtics with a team-high 31 points, had high praise for Williams. He considers his rookie a difference-maker, someone who can do things that not a lot of guys can do and for his defensive abilities, it's what makes him a special player.


"[Williams] changes a lot," Morris said. "There's not too many guys in the league that can block Anthony Davis' shot. That alone is special and he showed that a few times and he's a young guy. Once he really learns and once he really gets out there and [gets] time to play, he's going to be a beast."

Williams could be on pace to see valuable minutes sooner rather than later. With Guerschon Yabusele (ankle sprain) out for an extended period of time and along with the Celtics expected to cautiously treat Al Horford's (tendinitis) injury, there is a void in the front court.

Expect to see more minutes for Williams alongside Daniel Theis, who started in place of Horford against the Pelicans on Monday.