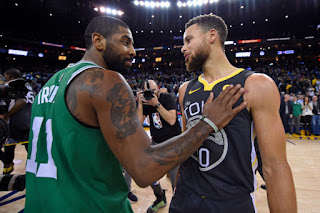 When Kyrie Irving shared his flat-earth theory two years ago, he never thought it would be a conversation that may very well become a footnote to his legacy as the 'NBA player who believed the world is flat.' For plenty of people, that will be the case when his career is all said and done.

For Irving, Steph Curry questioning the moon landing earlier this month reminded him of how much weight goes into an athlete's opinion on such conspiracy theories. Irving, who received plenty of backlash for his comments, has definitely been in Curry's shoes.

He challenged people to do their research as he stood by his belief that the world flat. And although he recently apologized -- while not saying he believes the earth is round -- to science teachers around the country for his flat-earth beliefs at the Forbes 30 Under 30 Summit back in October, he hasn't forgotten the way he was treated by the public.

Curry, who was a guest on The Ringer's "Winging It" podcast when he claimed the moon landing was staged, recently told reporters that he was joking. Irving gave a lengthy response when he was asked about Curry's comments.


"We live in a America, where people say (expletive) all the time about one another and it's mean. It's bad, kids see it, like everyone gets a piece of it and then it's the next story, the next thing that coming out of someone's mouth," Irving said. "There's world hunger going on. There's political things going on. There's no many higher things in the totem pole of society that matter to human beings but hey, Steph Curry says he doesn't believe the moon (landing), it's the thing all over. It's on CNN and they say we're just jocks, we're just athletes but it's on your channel."

Irving doesn't think it's deserving for athletes to be mocked or criticized for stating their opinion on things regardless of one's fame and fortune.


"It's ridiculous to treat another human being like that," Irving explained. "People do it behind screens, people do it on their phones every day. It's something to learn as a human being how to treat and respect others."