Jayson Tatum: 'I want to be the next Paul [Pierce]' 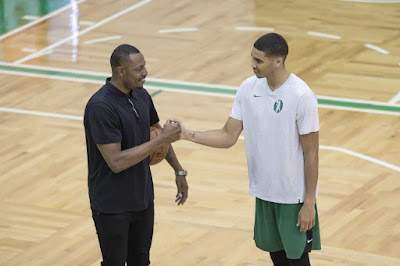 In only his second season in Boston, Jayson Tatum already has his eyes set on spending his entire career as a member of the NBA's most storied franchise. He also hopes he will follow in the same footsteps as one of the most revered Celtics players in recent history.

Paul Pierce spent 15 years in green-and-white. He became the franchise's second all-time scorer, captured an NBA title and his iconic No. 34 hangs in the rafters above the parquet floor.

In a recent interview with ESPN's Sam Alipour, Tatum revealed he plans to etch his own legacy -- one similar to Pierce -- become a beloved Celtic, lead Boston to its next championship and earn an NBA MVP award all in the same city.


"I want to win a championship," Tatum said. "I want to be MVP, I want to be an All-Star, I want to be the next Paul (Pierce) for the Celtics, spend my whole career here and have the city of Boston love me. Because they love Paul Pierce in Boston."

Tatum is certainly on pace to become the next Pierce. As the focal point of a Celtics team that nearly reached the NBA Finals last season, he's already proven that he's on his way.

The second-year forward is also fortunate enough to play for a contending team throughout his first years as pro. Tatum will be playing for a team with championship aspirations for years from now, something Pierce had to wait for throughout the first half of his career.

Still, Tatum is certainly saying all the right things in terms of where his heart is. He clearly understands the rich history, has already been tasted the big moments that come with the Eastern Conference Finals and if he remains in Boston for the foreseeable, is in position to compete for titles from now -- in his early 20s -- until beyond.