Why Terry Rozier is worth keeping alongside Kyrie Irving 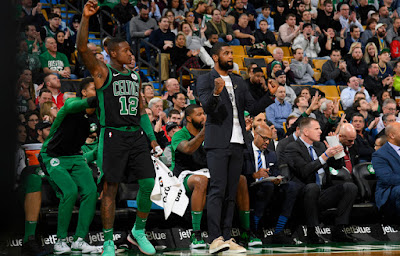 It's hard to put into concrete terms why teams led by Brad Stevens ten to succeed when undermanned. But for Terry Rozier, the answer to his recent renaissance is quite clear: he's a starting point guard who's unable to adept in a lesser role off the bench.

Over the summer, Boston should have traded Rozier -- was my first impression -- to avoid the difficult task of reintegrating the Louisville product into a backup role following the success of a starter who led his team throughout a deep playoff run. Especially, for someone who entered the league with low expectations after the Celtics surprisingly drafted him in the first round of the 2015 NBA Draft.

Rozier, who was projected to be an early second-round pick at best, was selected with the 16th overall pick by the Celtics and struggled out of the gate. He was too short to defend shooting guards and fairly abysmal off-ball scorer, thus, forcing Stevens to feed him shots and let the offense at times march to the tune of Rozier's drum.

Last season, after Kyrie Irving was ruled out for the year, Rozier averaged 68.2 passes per game as the primary ball-handler in the first unit, creating 12.5 points per game on passes alone. Coming into this season, the idea of playing Rozier next to Irving was rarely entertained because the two styles didn't mesh and with Rozier set to enter free agency this upcoming summer, he likely wants to pad his stats for future suitors to lure in a lucrative paycheck.

In the minimized role, Rozier's facilitated less and his shot selection shockingly declined. He's currently shooting 22.5 percent from mid-range off of 40 attempts a night.

His passes per game fell to 34.1, while averaging 2.6 assists. Throughout the past two games, with Irving nursing a shoulder injury that sidelined him Monday night against the Pelicans, Rozier's passes per game jumped to an even 59 -- which created nine points -- close to last season's averages.

But he is finding new ways to be effective. Rozier's become a sneaky good finisher around the rim, scoring at a 62.2 percent clip from the restricted-area which is quite an improvement from last year's 51.4 percentage in the games he started when he took over Irving's starting job.

For all the panic, short-sighted hypothetical trades constructed during Boston's sluggish start to the year involving Rozier, it looks like Danny Ainge made the right decision to hold onto his backup guard. With the fragility of Irving's body, Rozier is an important security blanket to have.

And with Boston, a team that was without Irving and Gordon Hayward, one game away from the Finals last season, having at least one for the upcoming playoffs should equate to the first NBA Finals appearance of Stevens' tenure in Boston.