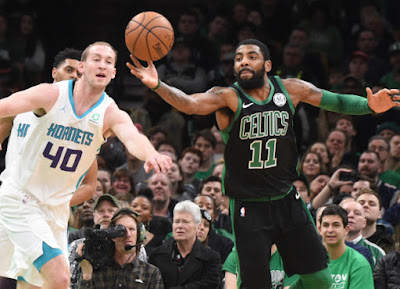 Just when it seemed liked the Celtics were spiraling, Brad Stevens' short-handed roster got a boost with a pair of much needed veterans back into their starting lineup to beat the Charlotte Hornets 119-103 on Sunday night at home and snap a three-game losing streak.

It was a battle of the All-Star point-guards when it came to Kyrie Irving, who finished with a game-high 25 points on 9-of-12 shooting from the field, including four made 3-pointers and Kemba Walker, who led the Hornets with 21 points on the night.

The Celtics were just 48-hours removed from a 120-107 loss to the Bucks at the TD Garden that resulted in a closed-door locker room meeting, followed by a second team discussion on Saturday.


"The team meeting was good," said Marcus Morris, who had 12 points and eight rebounds after missing the previous two games with a sore right knee. "We talked about a few things. Guys understood where other guys were coming from. We just opened up to each other, and I think it was beneficial."

Al Horford also made his return after being on the shelf for nearly three weeks due to tendinitis in his left knee, chip in 10 points, 6 rebounds and 5 assists on a time restriction.


"We have so much depth," Irving said. "Getting past those things, just egocentric things, this is a chance of a lifetime for us. In order to achieve what we want to, we have to be closer as a team."

Boston never trailed against the Hornets, shooting over 50 percent from the field in the opening frame and they didn't look back, much like they did during their recent eight-game win streak.

The Celtics took a 68-47 lead into halftime and used a 12-4 run at the start of the third quarter to push the deficit 80-53, the largest margin of the night with 6:57 remaining in the period.

Jayson Tatum added 17 points for the Celtics, who's starters outscored Charlotte's 70-49, while Jermey Lamb was the only non-reserve other than Walker to score in double-figure with 14 points for the Hornets who are now 16-16 on the season.

The Celtics (19-13) will host the Philadelphia 76ers (22-12) on Christmas Day, their first meeting since the Sixers acquired Jimmy Butler. Boston beat their division rivals back on opening night at the Garden.

Al Horford, who made his 900th career block in the third quarter, said he felt good in his return after missing the last seven games with left knee soreness. The Celtics big man went a perfect 4-for-4 from the field in 19 minutes of action.


"I'm just happy that I was able to go out there and play with a lot of energy. It's just good to be back. Sitting on the sidelines is tough, not being able to be on the court and help the guys," said Horford.