Are the Celtics back on track following team meeting? 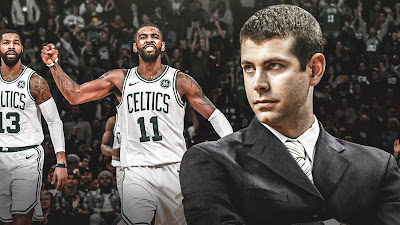 It gave his players an opportunity to open up with one another and reflect on the team's shortcomings. Although the timing of the meeting wasn't ideal -- Stevens would have preferred his team to have had its meeting after its obligated media scrums -- the Celtics head coach believes the conversation may not have been as honest in that moment if they had decided to wait.

He spoke about it prior to Sunday night's game against the Hornets about Friday's team meeting that bled into Saturday as well.


"I know everybody here has got a job to do and so does one of the coaches that was in there after you guys were done with the media, I wish we could have gotten out of there quicker," Stevens said. "But it's probably better to have that transparent talk in the locker room amongst us prior to meeting with everybody with a recorder.

"But those are moments, and it's interesting because every time I read about a team meetings, it's like 'Yeah, everybody has team meetings all the time.' Everyday we have a closed door meetings but some are obviously more impact-full, more transparent and a little bit more raw than others and I think those are probably the most memorable, enjoyable and purposeful times when you reflect back on the season."

The Celtics bounced back from their three-game losing streak with a 119-103 win over Charlotte. Boston improved to a 19-13 record and are now two games behind its next opponent -- the 76ers -- which they will face next on Christmas day at TD Garden.

Following the win, Stevens was asked if the player's meeting had much to do with Sunday's win, a question that the Celtics head coach wasn't set on calling it the sole reason for a successful night but did think it wasn't a coincidence that his team is in a better space Sunday than they were prior to its win over the Hornets.


"I don't know, I mean I said, the whole deal was really well-intentioned and it was really -- you look back -- we'll look back on it as a great experience," Stevens said. "It was a bunch of really high-performing players in there just being really transparent, young human beings, and I think that's a pretty cool thing to be a part of. So, whether that affects how the ball goes in or not, how much looser you look on the bench, I don't know. But it was a good experience and I think that that's part of a team's journey."

The Celtics are hoping that Friday's meeting is a sign of good things to come. Stevens spoke to his players Saturday as a follow up and believes Friday's conversation will lead to others down the road and that will push his team to another level of commitment due to open honest dialogue between his players.

Stevens, much like the rest of us, is waiting to see the end result in due time. Unsure if the discussion will bring his team closer together, he's does think it will be a part of the season that will be a memorable one.

One thing that's for sure, the Celtics look more like the team we saw throughout their eight-game winning streak Sunday than the one we saw during the three-game skid. The addition of Al Horford and Marcus Morris made all the difference against the Hornets.

They combined for 22 points and 14 rebounds. Morris finished with a game-high plus-26 game rating, him and Morris were constant threats from outside and made a difference defensively while creating stops and turning them into fast break buckets.

It was good to see the starting lineup intact. The return of Horford and Morris certainly made  a difference on both ends of the floor, still, all eyes will be focused on how the Celtics will perform Tuesday night when they host the 76ers on Christmas Day -- a true challenge for a team searching for a defining win against a contending team in the Eastern Conference.