Marcus Morris ruled out vs Suns 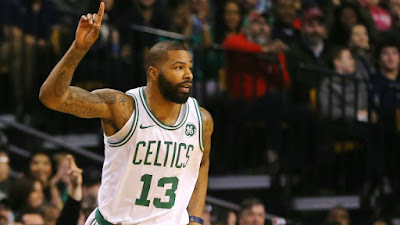 The Celtics will begin their four-game home stand without a member of their starting lineup.

Hours before tip-off between Boston and the Suns, team officials announced Marcus Morris (right knee soreness) will not suit up against Phoenix. Head coach Brad Stevens was asked about the late scratch.


"Marcus was a little sore after the Detroit game but practiced last couple of days, felt sore again today so he'll be out tonight," Stevens said. "We'll re-access tomorrow."

Jaylen Brown, who was questionable Wednesday morning, was activated by the afternoon and will suit up. No word if he'll be in the starting five.

Celtics head coach did not reveal who will start in Morris' place. Instead, he will update his starting lineup just before tip-off.

Stevens did, however, talk about how well the Suns have been playing of late. Phoenix (7-24) enters TD Garden on a three-game winning streak -- which nearly accounts for half of its wins on the season. New acquired Kelly Oubre Jr. will make his Suns debut off the bench for the Suns.

Oubre Jr. along with Austin Rivers were dealt from the Wizards to the Suns in exchange for Trevor Ariza earlier this week.