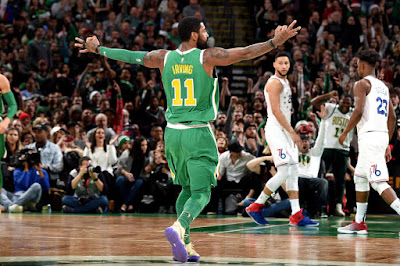 When the Sixers traded for Jimmy Butler earlier this season, they did it to fill a crucial void. They needed a closer -- someone they could turn to in late-game situations who had the capability to put a team on his back and finish games.

Philadelphia didn't have that kind of player in last year's postseason. It's a big reason why the Celtics only needed five games to top the Sixers in a best-of-7 series, despite not having Kyrie Irving and Gordon Hayward in the lineup.

Ben Simmons can stuff a stat sheet, set up his teammates and drive to the rim but the well dries up once you force him to shoot. Joel Embiid can rebound and defend at a high level but isn't going to put the ball on the floor and execute isolation plays when Philly needs buckets in bunches.

Instead, it was players like Jayson Tatum, Terry Rozier and Marcus Morris scoring the big shots down the stretch. They outmatched Embiid and Simmons. But adding an All-Star like Butler has given the Sixers a go-to guy they can count on when the game's on the line.

From a scoring standpoint, Butler can convert shots almost as well as anyone. And when it comes to defending a player like Irving -- one of the league's best finishers around -- you'd be hard-pressed to find a few defensive marksmen tougher than Butler.

There's a short list of top two-way players in the league and Butler certainly reigns in the top tier as a high volume scorer who is also one of the best on-ball defenders in the NBA. He gets it done on both ends of the floor.

Philadelphia had no problem trading away its outside scoring in Dario Saric and Robert Covington for a player of Butler's magnitude. For a team with championship aspirations, it was a deal the Sixers felt like they had to make, if they had any hopes of topping teams like the Bucks, Raptors or Celtics in the long run.

All three squads collectively handed the Sixers three quick losses throughout the first nine games of the 2018-19 season, and did it in blowout fashion. For Philly, losing by 15 points or more to each of the three teams projected to finish in the upper echelon of the Eastern Conference was a telling sign.

Butler's relationship with the Timberwolves was beyond repair, which made dealing for him a no-brainer for the Sixers and it paid off. Philadelphia entered TD Garden on Christmas Day with a 13-6 record since acquiring Butler and the team was ecstatic to avenge its season-opening loss.

However, Irving had other plans. After rattling off 23 first-half points, it gave the Celtics an 11-point cushion in the third quarter before Butler proved why he's a difference-maker in such a marquee matchup.

Behind Butler's 15 second-half points, the Sixers erased their double-digit deficit and pull ahead by two points before head coach Brett Brown turned to his key player for his defense in guarding Irving at the end of regulation. Behind Embiid's big double-double (34 points, 16 rebounds), Butler's 24 points made the comeback possible with help from JJ Redick's 17 points, including 4-of-10 from deep.

With the game on the line it was Butler on the Celtics' leading scorer at the end of the fourth quarter. Irving took Butler to the rim before releasing a high-arc fade-away that push the game into overtime.

From there, the Celtics cruised behind back-to-back 3-pointers from Irving in the final two minutes that led to a 121-114 overtime win. Irving finished with 40 points and 10 rebounds on his way to one of his most impressive performances of the season.


"First of all, it's him," Stevens replied when asked about Irving's quick starts. "Secondly, it's a function of the one thing that I think we've gotten better at offensively over the last couple months -- is spacing and early attack. And, you know, he's a big reason why, obviously. But our bigs are doing a good job hunting guys in transition. We're playing with a little more tempo than we played with the first couple of weeks."

Irving's offensive explosion wasn't just the difference between the Celtics winning and losing, it reminded the Sixers that Irving is a cut above the rest. He was the best player between the two teams and not even Butler's stifling one-on-one defense could stop him.

Irving scored 11 points on 5-of-7 shots when Butler was guarding him. He made it look effortless.


"Come out and have fun," Irving replied when asked about his mindset heading into Tuesday's game. "You know, enjoy being out there with my teammates. You know, high-level game, always talk about being on those big stages -- just so much fun. It's just competition at its highest. I mean, I love going against the best so it's not too often you get to do that in the regular season, especially on a holiday like Christmas.

"Got to open presents with my family this morning and come in to work. You know, it's great."

All of a sudden, Irving's turned into one of the hottest scorers in the league and was nearly impossible to slow down. He's on pace to have a strong finish this momentum on the road -- where the Celtics will make three stops out west against the Rockets, Grizzlies and Spurs.

As for the Sixers, there's still plenty of time for them to figure things out with Butler and the rest of the roster as they try to find ways to slow down Irving and get the best out of their rotation. The Celtics may not be head-and-shoulders above Philly in terms of the matchup but they are a better team at the moment, and that has everything to do with Irving.

Celtics: For the first time in his career, Irving scored 40 points and pulled down 10 rebounds in a single game. Throughout Irving's last seven games, he's averaging 28.1 points while shooting at a 48.7 percent clip. Irving, Tatum and Morris combined for 86 of the Celtics' 121 points on 50 percent shooting