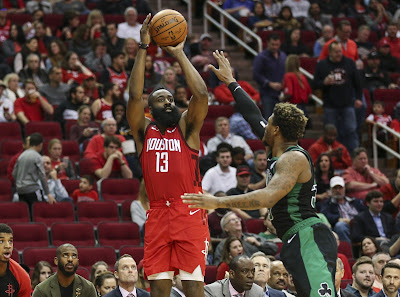 Although the Celtics have been one of the best defensive teams in the league this season, there's a glaring weakness that has been exposed.

Boston struggle with defending the perimeter. In three of its last five losses, opponents have averaged 16.6 treys from deep while the Celtics are ranked as one of the top teams in highest 3-point percentage allowed.

They entered Thursday night's game against the Rockets third (33 percent) in the league in opponent 3-point percentage -- a statistical category that's a big part of Houston's offense. When the Rockets get going from outside, they're a tough team to beat and they demonstrated that against the Celtics Thursday night.

In the end, the Rockets topped the Celtics, 127-113 -- Boston's fourth loss in six tries. Kyrie Irving's 23 points wasn't enough in Houston and for the first time since last Friday's loss to the Bucks, he wasn't the best player on the floor.

James Harden finished with a game-high 45 points on 11-of-26 from the field. He's the second player this year to score 45-plus points against the Celtics, the first was Jamal Murray's 48 points in Denver that also resulted in another loss.


"We tried to get up into his air space and he went into that stretch where he missed everything but then we fouled him every time," Brad Stevens explained after the game. "First half he didn't shoot a free-throw. In the second half, he shot 17. He's a hard guy to guard."

Led by Harden's nine treys -- which is now a new franchise record for most 3-pointers allowed by one player against the Celtics -- the Rockets caught fire throughout the second half. They finished 18-of-45 from behind the arc and kept Boston at bay throughout the fourth quarter.

The Celtics couldn't contain Harden. When he wasn't draining 3-pointers and driving to the hoop, he was drawing fouls and trips to the free-throw line. Six of his 17 attempts from the charity stripe came in two shooting fouls from deep -- both crushed the Celtics' momentum in the final frame.

The Mavericks, Bucks and Rockets drained 16 or more 3-pointers in each of the Celtics' recent losses but when Harden was putting together one of his best performances of the season, Boston failed to put together a fourth-quarter run.

Stevens also pointed to the rebounding differential -- which was a plus-16 in favor of the Rockets (54-38), including 16 offensive rebounds that turned into 18 second-chance points.

Marcus Morris (19 points), who was one of five Celtics players who scored in double figures, was ejected when he picked up his second technical foul in the second half for arguing with an official. Jaylen Brown's 18 points led the bench and Al Horford finished with 15 points.

Harden got plenty of help from his teammates Clint Capela (24 points, 18 rebounds) and Eric Gordon (20 points). The trio combined for 89 points on 27-of-56 attempts.

The Celtics will make their next stop of their three-game road trip in Memphis Saturday when they take on the Grizzlies.