Examining the Celtics trade for Kyrie Irving, their long-term future 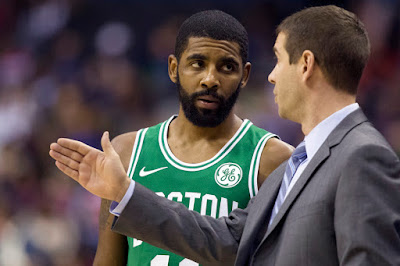 The trade for Kyrie Irving from the Cleveland Cavaliers to the Boston Celtics has had an impact on many levels over the past 16 months. If anything, Wednesday night was just a classic example of how clutch Irving has been when he won his duel against All-Star guard John Wall and the Wizards on the road.

Kyrie Irving has quickly become one of the top leaders and players in the NBA after getting out from LeBron James' shadow. While the trade has had a heavy influence on Irving and all of those involved in the deal, the more intriguing part of the trade may actually be those who were not included in the deal. The move has affected the Celtics in many ways beyond just the players who were traded to Cleveland.

Such examples can be seen with Celtics guards Marcus Smart and Terry Rozier. Prior to the blockbuster trade, many were discussing how Smart or Rozier would look as the long term options at the point. Now? Kyrie has us wondering what magical shot he'll hit to win Boston it's first title since 2008.

Or, you could look at Cleveland and the fantastic play of this year's eighth overall pick Collin Sexton. Sexton was a result of the Brooklyn Nets' pick (part of the Paul Pierce, Kevin Garnett trade in 2103) that was sent to Cleveland in return for Irving (along with Isaiah Thomas). The rookie is currently averaging over 14 points and three assists a game to start his career with the Cavaliers. Some have gone so far to say that the deal could end up coming back to bite Boston if Sexton becomes a future star that surpasses Irving.

Most of us would disagree.

While the Cavs, who are 7-21 so far this season, may feel they have a good piece for their future in Sexton, Boston may also feel positive about it's own. The trade however, has had some short term negative impacts in year two. Besides minutes to the point guard position being difficult to split for Brad Stevens, it also includes roles on this season's talented roster. This issue has been evident with scoring and shooting rolls for Jaylen Brown and Jason Tatum. Both players late last season were budding stars in the absence of Kyrie Irving, especially in during the playoffs. Now with Irving’s return, we've seen uneven performances due to his involvement in the team's offense as he's the team's primary ball handler and scorer. 

We also see the Celtics roster's construction being discussed long term when in the context of building around Kyrie Irving. Boston may be looking to add another superstar like Anthony Davis this coming summer, which will have a drastic shift in salary cap obligations once Irving decides to opt out of his player option next July. This would effect several players, primarily, the aforementioned Terry Rozier and Marcus Morris, who will be an unrestricted free agent next summer, as well as the potential long term future of Jaylen Brown. Brown will have one more season under his rookie contract before hitting the restricted free agent market in 2020. This could result in a number of scenarios if Irving and Hayward are both making in excess of $30 million per-year each.

Irving's pending max deal could also impact veteran Al Horford, who can opt out of his current contract next summer, along with Irving. Would Horford opt out to allow the Celtics more flexibility when it comes to the long term options for the roster? This feels slightly optimistic to do since Horford will be eligible to make over $30 million next season. It is highly unlikely that Horford will command that type of money on the open market or anything in that neighborhood meaning it would be a massive pay cut for him going forward.

The debate over the Kyrie Irving trade will drag on for over the next 12-18 months due to the uncertainty of his future. If the superstar decides to stay in Boston beyond this season, the deal ends up being a win for the Celtics. If not, Irving will hit the open market next summer and walk away from the team who paid the Cavaliers' ransom and Boston could easily be second guessed in their move. Regardless, Collin Sexton will be the pick that the Celtics traded away from it's war chest from Brooklyn, another long term element in trading for Irving.

Ultimately, it will come down to titles and hanging banners at the TD Garden. If Irving can deliver championships and winning for the Celtics, the trade obviously was well worth it.