Ben Simmons on Marcus Smart: 'He got a tech for being silly' 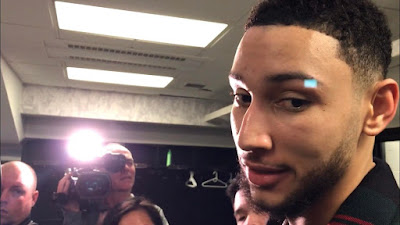 Before the Celtics topped the Sixers on Christmas Day, there was a moment throughout the overtime period where it felt like Philadelphia was going to pull ahead for good.

The Sixers grabbed a quick four-point lead with just over three minutes left when Marcus Smart earned a technical foul for shoving Ben Simmons after the two battled for a rebound. I asked Simmons about the foul following Philadelphia's 121-114 loss.

Philly led by five points -- its biggest lead of the extra period -- before the Celtics came roaring back. Boston proceeded with a 13-1 run, highlighted by back-to-back treys from Kyrie Irving in the final minutes.

The Sixers and Celtics will have their next showdown in Philadelphia on February 12.


Ben Simmons on Marcus Smart: “He got a tech for being silly” #Celtics #Sixers pic.twitter.com/XdENZQ60jG
— Josue Pavón (@Joe_Sway) December 26, 2018