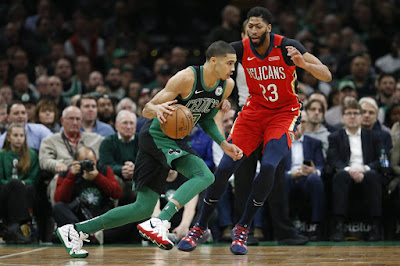 He's committed to the only team he's played for throughout his NBA career but until he officially extends his contract to stick around long term, Celtics fans will continue to drool over the thought of seeing him in green-and-white and Monday night's game was the latest reminder of just how great things would be with Davis in the fold. It's an ongoing conversation surrounding Boston and Davis and it's not going to end anytime soon, especially considering what happened at TD Garden.

The league's most dominant big man delivered another stellar performance, finishing with nearly half of the Pelicans' 100 points (41) to go with his 7 rebounds and 4 steals. And it didn't matter, not even a little bit.

It didn't phase the undermanned, yet still, streaking Celtics. With no Kyrie Irving, Al Horford, Gordon Hayward and Aron Baynes, Boston still managed to cruise to its sixth consecutive win, topping the Pelicans 113-100. Davis got help from Julilus Randle's double-double (20 points, 11 rebounds) but that was where the offensive production slowed down, no other teammate scored over 8 points for New Orleans -- it was another reminder for the Pelicans of just how far they are from becoming a contending team.

Losing DeMarcus Cousins and Rajon Rondo was a major setback for the franchise, following a playoff run that ended against the champion Warriors in the Western Conference Semifinals. It was evident the Pelicans have been unable make up for what they lost.

Meanwhile, the Celtics youngsters were on full display. From Jayson Tatum's 21 points on 10-of-16 from the field and Jaylen Brown's 19 points, including 4-of-7 from deep to rookie Robert Williams III finishing with 11 rebounds to go with his three blocks -- two of which happened against Davis -- it reminded everyone of the assets the Celtics have to offer for a hypothetical deal that is one 'Rose Rule' away from happening.

Due to the NBA's 'Rose Rule,' Kyrie Irving and Davis -- two players that were re-signed from their rookie deal that allowed their respective teams to go over the cap to keep them around -- cannot play on the same team. There can only be one player signed under this stimulation per team, therefore, in order for the Celtics to trade for Davis without giving up Irving they're going to have to wait until their All-Star point guard signs a new deal next summer.

However, it didn't come as a surprise when fans at TD Garden cheered Davis' player introduction prior to tip-off, even though the Pelicans big man acknowledged the ovation, he's still focused on the betterment of his team.


"I'm trying to do whatever I can to help this team get wins with the roster we have," Davis said. "It's been a rocky season so it's on me to try to figure it out. I know the team follows me. I'm the leader and I've got to be the one to make sure that we're ready to play every night so for me I just go out there and play with this team and go out there and try to have fun and get wins. That's all I'm worried about is getting wins for this team and hopefully we can get further than we did last year."

Still, Boston is in a unique situation. The depth of its roster allows a team like the Pelicans to enter TD Garden and drop a double-digit defeat against the Celtics' B-Team. It also allowed New Orleans to get an up close look at what could be the building blocks of its future.

The Pelicans may be hard pressed to find an alternative packaged deal that would be better than two of the three aforementioned Celtics players coupled with future first-round picks. The Celtics own potentially three first-round picks in the 2019 NBA Draft, which would sweeten a packaged trade involving Tatum or Brown, and Williams.

Celtics would have to fill in cap space but a lot can transpire between now and 2020 -- when Davis can ultimately opt out and become a free agent. The Pelicans are going to have to make it worth their wild, which right now seems like out of the realm of possibility but we've seen crazier things happen in the NBA.

No one could have predicted seeing one of the best big men in Cousins shipped off to New Orleans in exchange for a deal centered around shooter Buddy Hield or that we would see Cousins leave the Pelicans to sign a one-year, $5 million contract with the champion Warriors. It's difficult to foresee what could happen between now and 2020 but one thing's for sure; the Celtics will keep a 'assets for Davis' stash tucked away for that rainy day.

Today it's Tatum or Brown and Williams and next year it could be a different list of names. Still, New Orleans will dedicate next summer to finding a way to bring in help with hopes that they can surround its superstar with a talented roster that will force Davis to commit.

But until Davis inks a new deal with the Pelicans or signs elsewhere in 2020 -- when he can opt out of his current deal -- his name will continue to be linked to the Celtics.