Jaylen Brown opens up about coming to grips with new role 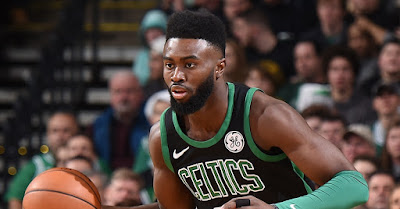 The Celtics haven't lost a single game since Brad Stevens made drastic changes to his starting lineup. Adding Marcus Smart and Marcus Morris has turned things around.

Boston is far from the .500 team that sat in the bottom half of the Eastern Conference with a 10-10 record back in late November. However, Jaylen Brown, who suffered a back injury that forced him to miss the first three games of the Celtics' current seven-game winning streak, is having a tough time adjusting to his demoted role off the bench.

Frustrations between Brown and two of his teammates boiled over in Monday's win over the Pelicans when Brown appeared to be out of sync and disconnected to plays ran by his team. Marcus Morris and Terry Rozier called him on two separate occasions before Brown bounced back with a terrific second-half performance.

Statistically, he's playing some of the best basketball we've seen from him this year, averaging 21 points while shooting at an impressive 56.8 percent clip. But while opening up to ESPN's Jackie MacMullan about coming to grips with his diminished role, Brown admitted the transition has been a difficult one.


"It's probably been the hardest thing I've had to deal with so far in my career," Brown said. "Just coming from a position where you had so much responsibility and now that responsibility is lessened. Expectations have been raised but your responsibility goes down, so it's hard to reach those expectations when you aren't being asked to do as much.

So far, the focus has paid off. Brown has led the second unit throughout his past three games since his return and while the Celtics managed to squeeze out a narrow overtime win over the Wizards Wednesday night in the nation's capital, it looked like the second unit could have used that extra offensive spark that has kept opponents at bay throughout most of the winning streak.

Boston has been crushing teams. Highlighted by a franchise-record 56-point beating against the Bulls, the average margin of victory throughout the streak has been 28.2 points per win.

After Kyrie Irving co-signed Stevens' newfound starting five, Brown took it as a knock on what he's meant to the starting lineup. However, Irving's remarks weren't intended as a form of disdain towards the third-year forward but rather commendation for Smart and Morris.


"I have such high expectations for guys like Jaylen, knowing how smart he is off the court, knowing his intellect, how he likes to be challenged," Irving says. "On the court, you just know there's so much more for him. You can see how much better he can get.

"I don't think Jaylen has ever been challenged in this way. When you're challenged sometimes, and you've been only doing it for three years, you can question a lot of things. You question yourself, and your confidence wavers because everything you've been doing up to this point has worked. You're used to doing little things to get you out of a rut, but suddenly that's not happening."

Irving, who had to play second fiddle to LeBron James when the Cavaliers suddenly went from being a top-notch lottery team to a championship contender, can certainly relate.


"You find yourself in a situation where every single day you are demanded to be great," Irving said. "That's a hard journey for anybody in this league, and to have that much talent and not be able to showcase it, I'm sure it's tough on him.

"I definitely understand it. I'm empathetic, and I'm also patient."

Being held to a higher standard has not only convinced Brown he's worthy to start alongside Irving, it's motivated him to prove his point guard and everyone else wrong.


"This is a story that's being written," Brown says. "There's going to be highs and lows. Everything that's happened, the energy will change. Come back in two weeks. The numbers will be different, and so will I."