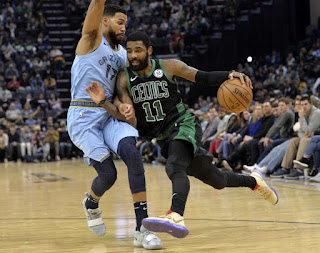 You can add another comeback win to Brad Stevens and the Celtics' season list of improbable victories.

Not even a 19-point lead in the third quarter was safe for the Grizzlies as Boston rallied back in the second half for a 112-103 win in Memphis. The Celtics drained 5-of-8 from deep before the final frame, where they outscored the Grizzlies, 33-16.

They forced Memphis into a plethora of turnovers, while players like Kyrie Irving, Marcus Morris and Al Horford drained game-defining shots towards the end of regulation. Irving attacked the basket relentlessly, Horford's pair of 3-pointers was huge in the final minutes and Morris' 9 fourth-quarter points all made a difference in the end of one of the most impressive wins of the season.


"I don't think that we ever got rattled in terms of whatever the score may have been and also communicating with these guys how great it is to get a road win," Irving said after the game. "It's hard to win on the road in the NBA. These guys are going home, doing their routine, seeing their families, kissing their babies and coming in and playing the game they love and we're in Memphis. In the hotel, Beale Street is right down the street, great culture but now coming out here we have to compete. We're away from home so it's professionalism standpoint as well as maturity."

Morris and Marcus Smart forced two key turnovers down the stretch -- both were converted into buckets as Boston's stifling defense was too much for the Grizzlies to handle. After committing a handful of turnovers throughout the first half, the Celtics finished with 16 Grizzlies turnovers and scored 18 fast-break points.

The Celtics will look to finish their three-game road trip 2-1 after they take on the Spurs in San Antonio on Monday.