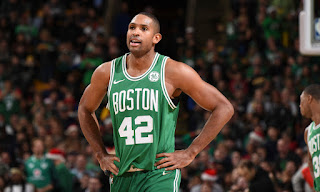 It's no secret that Al Horford prefers to play power forward over the center position. However, Brad Stevens' new lineup has opened up opportunities for the veteran big man.

Last season, Horford was able to play his desired position thanks to Aron Baynes, the starting twosome started almost every game because of Gordon Hayward's injury, it forced a massive reshaping of rotations and how minutes would be distributed.

It wasn't until the playoffs Horford saw a large jump in time played as a center and subsequently Baynes was benched in favor of smaller alternative lineups that featured guys like Marcus Morris, Jaylen Brown and Marcus Smart. This season, Horford's spent 94 percent of his time on the floor as a center and his numbers have dipped because of the fact it's very exhausting for him to play center, eventually it'll have its drawbacks.

Prior to this recent stretch -- where Stevens' new starting lineup features Morris and Smart -- Horford's numbers weren't encouraging. Although he was shooting 46.3 percent from the floor, his 30.3 percent clip from behind the arc was a career-low. He shot 43 percent in that statistical category last season, it's where the bulk of his scoring comes from.

Once Stevens came to the conclusion that Hayward and Brown should never spend time on the floor together, Horford's stats came back to his averages from last year and then got better. Since making the change of inserting Smart and Morris throughout the past three games, Horford's field goal percentage jumped to 53.7 percent, he's shooting 50 percent from deep to go with his 14 points, 5 rebounds and three assists.

Suddenly, old Horford is back due in large part to the Celtics pairing him with more complimentary pieces and the team making wide open shots. The Kyrie Irving-Horford pairing kept Boston's offense above water last season, this year, they've pushed them up a level.

The offensive rating soared from 103 to 116.8 net rating. Horford will look to keep his offensive production going Thursday night when the Celtics take on the Knicks at TD Garden.