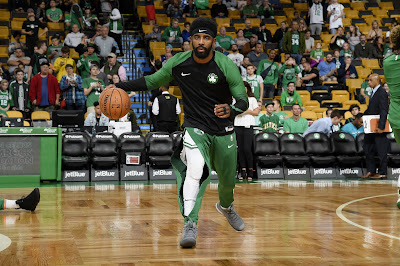 There is nothing like the feeling of Opening Night that gets NBA fans' adrenaline pumping.

With the season starting earlier than usual, it takes on the cliche that Christmas has come early for basketball fans. Especially if you're a Celtics fan, you must be anxious to see what this team can achieve this season.

The expectations for this team have changed dramatically from past seasons, last year in particular. Celtics went from losing their two primary starts for the year one season ago, having to rely on a rookie in Jayson Tatum and a second-year standout in Jaylen Brown, to help lead them to a deep playoff run which took many by surprise.

According to many media outlets, Celtics are heavy favorites to make it to the finals. With a healthy Kyrie Irving and Gordon Hayward returning, this team should be able to expand on their success from a season ago.

With the emergence of Terry Rozier, Marcus Smart and Marcus Morris adding more firepower to the bench, the Celtics will have a strong case to back up these premature finals predictions. However, before we start jumping ahead of ourselves with these predictions, the Celtics still have to go through the regular season.

With the departure of LeBron James leaving Cleveland for Los Angeles, the Eastern Conference is wide open for the taking. So which team will have a say in stopping the Celtics from proving most critics and Celtics fans right? In my opinion, none.

The team will go as far as Kyrie Irving is willing to take it. Sure, the Celtics have a deep team with a proven track record of players who showed that they could step up when called upon but Irving hasn't played a full season since entering the NBA in 2011.

This team is stacked and ready to go but Irving is the key for this team to reach championship status. The only thing standing in the way for the Celtics is if they can remain healthy throughout the year and at full strength when the playoffs roll around.

The NBA season is a grind as we all know it, and most of, if not, all NBA players agree that nobody is healthy when the playoffs come around. Overall, the buzz surrounding this team is well-deserved since they have so much young up-and-coming stars and role players that are well-coached.

Brad Stevens did an unbelievable job coaching his team through all the ups and downs they faced last season, so it only makes me wonder how he will respond when he has more firepower at his disposal. What direction will Tatum take his game to?

Will Brown continue his upward trajectory to an All-Star? Will the Celtics be the last team standing in June?

Answer to all these questions will be coming soon. Welcome to the 2018-19 season.