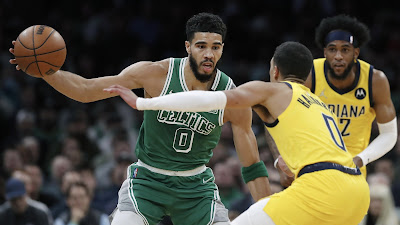 The Celtics held off the Indiana Pacers Friday night at TD Garden in a 128-123 victory to snap a two-game skid.
Jaylen Brown finished with 32 points on 12-of-18 shooting to go along with seven assists, while Jayson Tatum netted 31 points on 10-of-24 from the field and dished out six assists. It was the eighth time this season that the young stars each scored at least 30 points.

"We're not trying to take turns. Just playing the game the right way," said Tatum in his postgame presser. "If he takes six good shots in a row, that's fine with me."

Al Horford recorded 17 points, 10 rebounds and six assists for the Celtics, who are now 48-30 after six players scored in double-figures. Derrick White added 13 points off the bench to hand the visiting team their sixth straight loss.
Tyrese Haliburton led Indiana with 30 points on 10-of-11 from the floor, including a perfect 6-of-6 from deep, before fouling out early in the fourth quarter. Jalen Smith and Oshae Brissett each notched 17 points and six rebounds apiece for the 25-53 Pacers.
The Celtics had won 24 of their last 28 before falling to the Toronto Raptors without four of their starters and followed that up with a home loss to the Miami Heat -- the first time they had lost back-to-back games in over two months.
Indiana fought hard in an attempt to even the season series, despite not leading once all night, nearly giving the C's their third straight loss.

"Credit to them for making it tough on you," said Ime Udoka. "They're playing loose and free with nothing to lose right now. You can tell. At the same time, we're aiding them.

Boston jumped out to a 11-2 lead in the opening quarter before the Pacers used a 9-0 run to even the score. But the home team took a 37-28 advantage into the second and were up 68-61 at the break, while Haliburton had 22 points in the first half.
Indiana got within one (90-89) on a Buddy Hield 3-pointer with 1:13 left in the third period, but the C's scored six out of the next eight points -- to go into the final frame ahead 96-91.
With Indy trailing 103-101, Haliburton was called for his sixth foul with 8:13 remaining. The Celtics went on a 8-2 run before the Pacers answered with a 9-3 spurt of their own to get within two (114-112) with 4:32 left to play.
Boston led 124-120 in the final 39.8 seconds, when Horford found a roaming Tatum in the lane for a driving two-handed slam, essentially stopping one last rally attempt by the Pacers.
Playing without Robert Williams (partially torn meniscus) for the third straight game, the Celtics had a couple of injury scares after Brown got hit in the face by teammate Grant Williams but was able to continue. Williams stepped on Pacers player's foot on the sidelines after missing a 3, but was fine. Marcus Smart was seen limping off the court and into the locker room at the halftime buzzer following a collision with Daniel Theis before returning in the third quarter.

"I reaggravated an injury in my right ankle. It scared me for a moment as well," Smart said during his postgame comments. "Don't need to be going down at this time, getting close to the playoffs. But I'm fine. Checked it out. I'll be all right."

The Celtics will host the Washington Wizards (33-43) in their regular season finale at home Sunday night, before they play their last three games on the road.