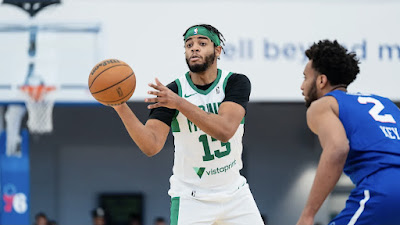 The Celtics announced Sunday morning the signing of forward Juwan Morgan just in time for the playoffs.
Morgan will fill Boston's final roster spot, as reported first by Sham Charania of The Athletic Saturday night.

The Boston Celtics are signing forward Juwan Morgan to a multiyear deal out of their NBA G League Maine affiliate, sources tell @TheAthletic @Stadium. Morgan played two NBA games this season for the Celtics and Raptors. He fills Boston’s open roster spot prior to playoffs.


Per NBA insider Keith Smith, Morgan's deal is for two years, which means the rest of this season and the 2022-23 campaign that is non-guaranteed.
Aside from recently completing a 10-day contract with Boston, Morgan has spent most of the current season with the Maine Celtics of the G League -- where he averaged 12.1 points, 5.7 rebounds and 2.9 assists in 20 games played (10 starts).
The 6-foot-7 forward spent the first two years of his NBA career with the Utah Jazz. Morgan also had another 10-day contract earlier this season with the Toronto Raptors.
With Morgan's signing, the Celtics roster now stand at 17-maxium players (15 standard deals and two Two-Way contracts). While Two-Way players are not eligible to play in the postseason, the C's playoff roster will look like:
The Celtics (50-31) play in their regular season finale tonight at 7:30 ET against the Memphis Grizzlies (56-25) on TNT. Boston could end up as either the No. 2, 3 or 4 seed in the East following today's result. The 2022 NBA Playoffs are set to tip-off Saturday, April 16 or Sunday, April 17.
Joel Pavón
Follow @Joe1_CSP