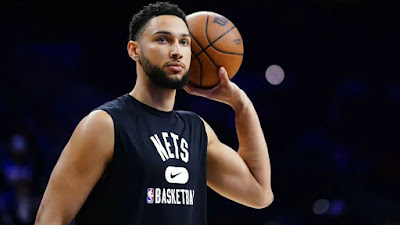 Ben Simmons is set to make his debut with the Brooklyn Nets in Game 4 against the Celtics come Monday night, barring any setbacks, according to ESPN's Adrian Wojnarowski.
The former All-Star guard, who has been making progress this week in practice from a herniated disk in his back, has officially been ruled out for Game 3 on Saturday at the Barclays Center. The Nets are hopeful that Simmons can play 10 to 15 minutes, per sources.

"It's literally day-to-day," Simmons said to reporters Friday afternoon. "So I've had plenty of great days, which has been great for me in building up. So we're just trying to put those great days together and just keep building up to get back on the floor and play at that high level. ... If I could play right now, I'd be on the court. So it is what it is."

While he has gotten in a few scrimmages already, Simmons is not sure what kind of impact he'll make on the series as the Nets could be down 0-3 by the start of Game 4.

"We'll find out," Simmons added. "It's a good challenge, but I'm looking forward to it. Especially playing with these guys. I think for me, my IQ's so high, to play with guys like Ky [Irving] and Seth [Curry] and Kev [Durant]. Just watching them, I know how they play, I know how they want to play. And for me to just get them in their spots and be a floor general, it's exciting. I'm looking forward to it."

Simmons was traded to Brooklyn from the Philadelphia 76ers (after a summer request) at the February deadline for James Harden and has not played an NBA game since June 20, 2021 -- citing mental health concerns and now battling a back injury over the past month.
Nets coach Steve Nash told the media earlier in the week that Simmons' potential return is up to the veteran if he simply says "I'm ready."

"We would be happy to have Ben play, and try to play, but only when he's ready, Nash said to reporters in post-practice presser. "And if he's not, he's not. So we're not in here just counting down the minutes 'til Ben's back. We want Ben to play when he's ready to play and wants to make an impact."

Simmons -- listed as day-to-day -- did note if and when he is indeed ready to go, it would be up to Nash and the Nets coaching staff on how many minutes he'll play, despite also being optimistic that he will fit right in with his new teammates.

The Nets host the Celtics in Game 3 on Saturday night at the Barclays Center before the two teams meet again in Game 4 Monday.
Joel Pavón
Follow @Joe1_CSP