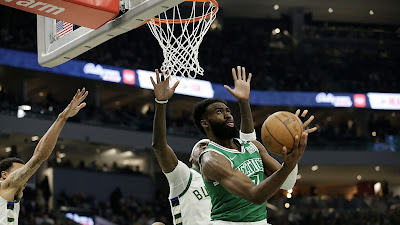 The Celtics missed a golden opportunity to hold on to the No. 2 spot in the East following a 127-121 loss to the Milwaukee Bucks at Fiserv Forum Thursday night.
Despite playing without three starters (Jayson Tatum, Al Horford and Robert Williams), Boston shot 21-of-50 from behind the 3-point arc and finished with six players scoring in double-figures.
Marcus Smart had 29 points on 10-of-16 shooting, including hitting 7-of-12 from deep to go along with seven assists and two steals. Jaylen Brown recorded his second career triple-double with 22 points, 10 rebounds and 11 assists (career-best).

"We've seen that growth from [Brown] this year," said Celtics coach Ime Udoka. "With certain guys out, he had the ball more and had to make those plays."

The C's, were on a second night of a back-to-back after cruising past the Chicago Bulls 117-94 Wednesday. Daniel Theis in his third straight start netted 22 points and Derrick White added 19 points (4-of-8 from 3), six rebounds for the Celtics, who fell to 50-31 and a half-game behind Milwaukee in the third spot.
Giannis Antetokounmpo went 11-of-21 from the floor for 29 points while grabbing 11 rebounds and dishing out five assists. Jrue Holiday also scored 29 points (eight rebounds and eight assists) and Khris Middleton chipped in 22 points, eight rebounds and nine assists for the Bucks, who are now 50-30 on the season with two games left -- as the Miami Heat (52-28) have clinched the East's top seed.
Smart's 3-pointer put the Celtics ahead 119-118 with 4:25 left and scored on a driving layup to make it 121-118, before Bobby Portis (17 points) tied it all up with a 3-ball with 2:11 remaining.
The Bucks went up for good after Antetokounmpo sank the second of two free throws. White missed a 3-pointer on the next play and Holiday followed his own miss with a putback to make it 124-121 with a minute left to play.
Boston failed to convert a field goal in the final 48 seconds after Brown missed a 3 and a Grant Williams' offensive rebound led to Theis missing a layup underneath the basket out of a timeout.
Besides the Bucks outscoring the visiting team 12-5 in the last 5:09 of the game, they also took advantage of Boston's lack of size by winning the scoring in the paint battle 58-34 and 14-5 on second chance points.
The Celtics head to Memphis to take on the Grizzlies (55-25) in their regular season finale Sunday night. TNT will have the tip-off at 7 ET.