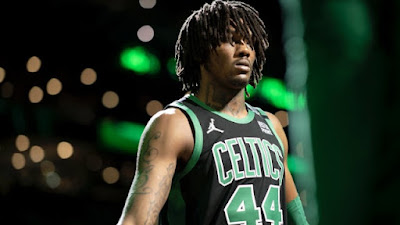 The Celtics announced that Robert Williams will be sidelined at least four to six weeks, as the big man underwent successful surgery to repair a partially torn meniscus in his left knee Wednesday morning.
With this timetable, the C's could have the 24-year old center back in the lineup as early as the second round of the Eastern Conference Playoffs, which would start between April 30 and May 2, according to ESPN's Adrian Wojnarowski.

ESPN Sources: After undergoing surgery for a torn meniscus in his left knee this morning, Boston Celtics C Robert Williams is expected to return within 4-to-6 weeks – a timetable that could land him back in the lineup as soon as the second-round of Eastern Conference playoffs.


Williams suffered the partial meniscus tear Sunday during the third quarter of the Celtics' 134-112 win over the Minnesota Timberwolves, but the extent of the injury was still unknown when Monday came around and no timetable was set until all surgical options were considered.
Boston played Monday without Williams, Jayson Tatum (knee soreness), Jaylen Brown (knee soreness) and Al Horford (personal), in their 115-112 overtime loss to the Toronto Raptors on the road.
Despite getting their latest win streak snapped, the Celtics remain optimistic they'll get arguably their defensive anchor back on the court sooner rather than later. With six games remaining in the regular season, Boston currently find themselves with the third best record in the East at 47-29 (following quite the turnaround since January 1) and one game behind the Miami Heat (48-28) -- who they face tonight at TD Garden.
Williams signed a four-year, $52 million extension last summer and was enjoying his best season as a pro, while also leading the NBA's best defense. The man they call "Time-Lord" is averaging 10.0 points, 9.6 rebounds and 2.2 blocks per contest and shooting 73.6% from the floor.
Joel Pavón
Follow @Joe1_CSP