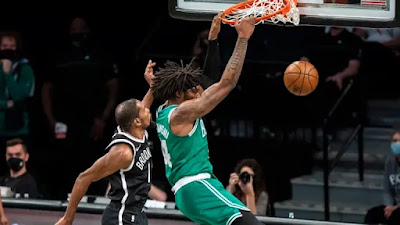 The Celtics could have Robert Williams back sooner rather than later, according to a report by Adrian Wojnarowski.
During his appearance on ESPN's NBA Countdown Wednesday night, Woj hinted that the C's roster may be completely healthy at some point during their first-round matchup against the Brooklyn Nets.

"The possibility I'm told is very real that Robert Williams could return in this first round series against the Nets," said Wojnarowski. "Now, Game 6 would fall on one month from his left knee meniscus surgery back on March 30th and the thought from the very beginning was because of the nature of this meniscus surgery that he could be back even within that one-month timetable. He's continued to progress, he's met all his benchmarks I'm told, and there's a real possibility for Boston."

While Williams' timeline for a probable return was originally four-to-six weeks following surgery to repair a partially torn meniscus in his left knee, the Celtics never officially ruled the 24-year-old big man out, despite the team "going in with the mindset" that he'd be sidelined for the series as of seven days ago.
Still, C's coach Ime Udoka maintains that there are no expectations for Williams to return at any point during the first round, when he updated the media on Wednesday after shoot-around about his starting center's recovery thus far.

"He's looking good and in good spirits, like I've said from Day One. Just attacking the rehab process and getting out on the court, getting some shooting drills and touch work," Udoka said during his post-practice presser. "We're happy with the progress, but at the same time, it's going to take time. Like I mentioned, probably, it's going to be a full series without him. That's what we're looking at in doing."

Wojnarowski isn't the only one saying expect Williams to play at some point during this first-round matchup against the Nets, long-time Celtics insider Steve Bulpett of Heavy.com also believes that 'Timelord' will return to the lineup well ahead of schedule.

"I do, and I think it could come earlier than that, too. It's going to be that he will be structurally ready enough to play, said Bulpett during his Wednesday conversation with Sean Deveney. "They did not rearrange stuff. They took away a problem area. How he feels physically, pain-tolerance-wise, he is doing pretty well right now. More, it will be a matter of, how does he feel, confidence-wise, vis-à-vis the knee? I think you could see him come back earlier."

Williams, who suffered the injury in his left knee back on March 27th in a home win over the Minnesota Timberwolves, has been a vital piece for Boston on both ends of the floor averaging 10.0 points, 9.6 rebounds and 2.2 blocks per contest and shooting 73.6% from the floor.
The Celtics will host Game 1 of their best-of-7 series against Brooklyn on Sunday afternoon at TD Garden, as ABC has the tip-off at 3:30 ET.
Joel Pavón
Follow @Joe1_CSP