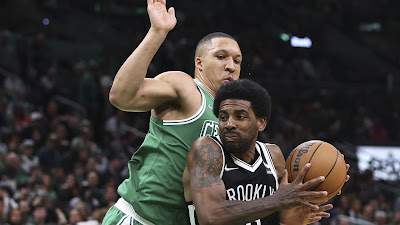 Kyrie Irving had a different tone following the Celtics 17-point comeback in Game 2 to beat the Brooklyn Nets 114-107 and take a 2-0 first-round series lead.
After being $50,000 lighter in his pockets for going back and forth with the fans at TD Garden, despite scoring 39 points in Game 1, Irving was very quite Wednesday night -- managing only 10 points on 4-of-13 shooting.
With the Nets now trailing, Irving gave praise to his former team on how they played in crunch time ahead of the best-of-7 series shifting to Brooklyn for Game 3 and 4.

"In the fourth quarter, they made some tough plays," Irving said of the Celtics in his postgame presser. "They had a good bench showing tonight, and when you've got seven guys in double figures, that definitely shows you that it's a team game out there. They played with cohesion, and some poise down the stretch."

Irving also noted that the Celtics, unlike the Nets, don't lack cohesiveness that his current team is still seeking.

"We're going against a team that's ben together for what, the last four, five years. So they don’t have to worry about that," he explained.

When asked if he was surprised that the Nets' former assistant in Ime Udoka has the Celtics playing so well in the first two games of this first-round matchup while it just being his first season as a head coach, Irving didn't hesitate to answer.

"I'm not surprised at all," he replied. "I just think the timing is right. Their window is now for these young guys that are on this team that have matured. They've been through series together, they've been through seasons together, they've been through battles together."
"I got a chance to experience some of that," Irving added. "Now being on the opposite end and going against a healthy Celtics team -- especially without Robert Williams -- you're just seeing there's a difference in their verve, there's a difference in the way they approach the game. And also they have a set offense and defense that they rely on."

Irving didn't leave out his former Celtics head coach, who is now president of basketball operations as also a major reason for the team's success so far this season.

"Ime's been a huge part of that. But you’ve got to give credit to that guy that's sitting in the president's role as well now," Irving concluded. "All of a sudden we don't get to see him as often, Brad Stevens definitely has a lot to do with that."

While it remains to be seen if Irving is blowing smoke, showing some buyers' remorse and or just taking the high-road after a tough few days in Boston, the All-Star guard seemed extremely calm after Brooklyn let two games get away.
Either way, Irving and the Nets face the possibility of going down 0-3, as Game 3 is set for Saturday night at Barclays Center, with a 7:30 ET tip-off on ESPN.
Joel Pavón
Follow @Joe1_CSP