Jayson Tatum on TD Garden crowd after Game 1 winner at the buzzer: 'probably the loudest I've heard it' 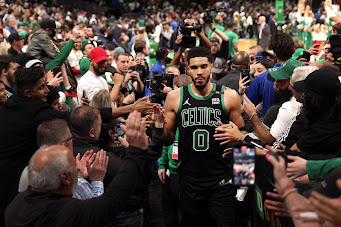 Jayson Tatum was all smiles on Easter Sunday after hitting his first career game-winner at the buzzer, as the Celtics beat the Brooklyn Nets 115-114 to take a 1-0 best-of-7 series lead.
The All-Star forward capped off what seemed like a chaotic final play by Boston and turned it into one of the biggest sports moments in the city's history. Tatum's spinning layup before time expired got TD Garden to erupt, while the Nets looked stunned to say the least

JAYSON TATUM FOR THE WIN!!!!!!! pic.twitter.com/WUr4UsaURk


After the game, Tatum was asked if that was the loudest crowd reaction he'd been apart of at the Garden.

"It was crazy. Everybody was on their feet. We just got a big stop. It doesn't get any better than that. A buzzer-beater in a playoff game at home in front of our fans. That's probably the loudest I've heard it," said Tatum.

Tatum, who finished with 31 points on 9-of-18 from the field and 10-of-12 from the free throw line, to go along with eight assists, thought Marcus Smart was going to shoot a 3-pointer in the final seconds before he made a cut towards the hoop.

"We all thought Smart was going to shoot it," Tatum explained. "When he took that dribble, we made eye contact, he made a great pass and I just had to make a layup."

Of course, the defensive possession on the other end just prior to final play of the game saw Kyrie Irving dribble right into a double-team before giving it up to Kevin Durant with three seconds left on the shot clock, only to force up a 28-footer that missed.

"We just tried to make it tough on them," said Tatum on the Nets last shot attempt. "It was a great defensive possession from our whole team. We did a good job with the box out and getting the rebound and then we pushed it the other way."

Celtics coach Ime Udoka elected not to call a timeout and all five of his players on the floor touched the ball in last 12.2 seconds to pull out the victory.

"You've gotta credit Ime for trusting us in that situation with one timeout to just go," Smart said in his postgame presser after his 20-point, seven-rebound and six-assist performance in Game 1. You got to give credit to [Jaylen Brown] for pushing the pace, drawing four and making the right read.

"I've always been told you have more time than you realize you have. I was about to throw it to Al [Horford] off the dribble and I saw JT cut at the last minute."

Veteran big man Al Horford has witnessed his fair share of huge moments in Boston as a Celtic and an opponent, but he knows there's nothing quite like playing a playoff game at TD Garden.

"It's the playoffs, we're playing at TD Garden, it doesn't get any better than being in this position. And our crowd was great tonight. They were unbelievable. And I'm just enjoying the moment," said Horford during his postgame comments.

The Celtics will take advantage of their home crowd once again and grab a 2-0 series lead when they host the Nets in Game 2 Wednesday night at 7:00 ET on TNT.
Joel Pavón
Follow @Joe1_CSP