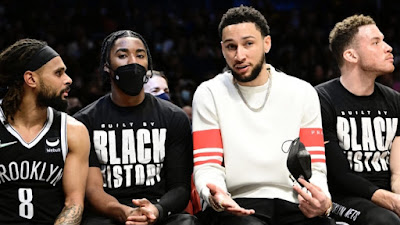 The Celtics and Brooklyn Nets are set to tip-off their Eastern Conference first-round playoff series on Sunday afternoon at 3:30 ET.
While there is much anticipation for this best-of-7 matchup to get underway, there's been speculations regarding the availability of point guard Ben Simmons to possibly make his Nets debut.
Simmons, 25, has not played an NBA game in any capacity since the postseason a year ago, as a member of the Philadelphia 76ers. Since then he held out from playing until eventually getting traded to Brooklyn at the deadline, but due to a reported herniated disk in his back, Simmons has yet to play a single minute in a Nets uniform yet.
But according to Brian Windhorst of ESPN, Simmons could suit up at some point during this series against Boston.

"I can't even believe it to be honest with you, but I am told that they are targeting Games 4, 5, or 6 of this upcoming series against the Celtics for a Ben Simmons debut for the Brooklyn Nets," Windhorst explained on "Get Up" Thursday morning.
"Now, as soon as I heard that, I said, 'Is he even playing 5-on-5 yet?' The answer is no," Windhorst added. "But, they're hoping to ramp him up over the next few days, and if there are no setbacks, they are expecting that Ben Simmons will be available at some point in this series."

Despite there still being uncertainty, Windhorst did mention that the Nets sounded the most optimistic since they acquired Simmons back in February.

"I have been hearing nothing but pessimism about Ben Simmons' availability now for two months, ever since shortly after the trade," said Windhorst. "This is the first time I'm hearing optimism, and I think that's notable."

Meanwhile, Kevin Durant responded with a simple "No, I'm not expecting him to play," when asked about his teammate coming back sooner rather than later and if there is any truth regarding reports about Simmons.

"I'm not putting any pressure on Ben to come out and hoop, said Durant of Simmons' possible return during his post-practice presser Thursday afternoon. "I'm not expecting him to do anything except get his body right as fast as he can."

With Game 4 of this series scheduled to get underway April 24 in Brooklyn, the Celtics could also have Robert Williams (partially torn meniscus) -- who was expected to miss the first-round -- back in their lineup as well if these two teams go the distance.
Joel Pavón
Follow @Joe1_CSP