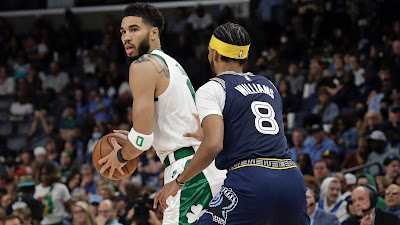 The Celtics beat the Memphis Grizzlies 139-110 in their season finale Sunday night at FedEx Forum to officially clinch the No. 2 spot in the East.
Jayson Tatum finished with 31 points on 11-of-14 shooting, including 6-of-8 from 3-point territory to go along with nine rebounds in 26 minutes of action. Jaylen Brown added 18 points, while Al Horford chipped in 13 points in his return from a one-game absence against the Milwaukee Bucks.
Boston's victory combined with the Bucks loss to the Cleveland Cavaliers earlier in the day assured the C's the second seed at 51-31, as they await the winner of the play-in game between the Cavs and Brooklyn Nets.

"We were worried about ourselves and getting some guys reps," said Celtics coach Ime Udoka.

The shorthanded Grizzlies, who locked up the second seed out west days ago, were led by Santi Aldama with 20 points off the bench and Ziaire Williams with 18 points. John Konchar had his first career triple-double of 17 points, 13 rebounds and 10 assists, while Kyle Anderson scored 16 points for Memphis -- who concluded the season at 56-26.
The Celtics shot 62.8% from the field and were 11-of-22 from deep in the first two quarters to take a 72-49 advantage at the break -- matching the most points scored in the first half this season -- while Tatum had 26.
Boston led by as many as 33 in the third quarter and were up 104-79 heading into the final frame, as Udoka sat his starters for the rest of the game.
The C's completed one of the biggest turnarounds in league history over the last three months after being below .500 to heading into the postseason as a favorite to come out of the Eastern Conference.

"It's exciting," Horford said in his postgame presser. "I don't know in mid January if this is a possibility. We should have settled for like 6 or 5. To be in this position is a testament to our group."

Daniel Thies made his third straight start in place of Robert Williams (partially torn meniscus), recording a double-double of 11 points and 10 rebounds in the win.
The Celtics will likely begin their playoff next Sunday at TD Garden, as tip-off for Game 1 of the first-round has not been released yet.
Joel Pavón
Follow @Joe1_CSP