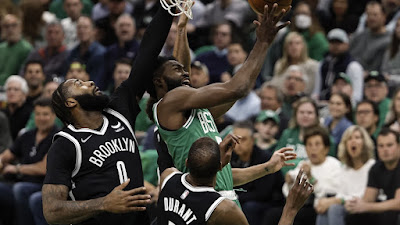 The Celtics found another way to come out on top following a 17-point comeback to beat the Brooklyn Nets 114-107 in Game 2 at TD Garden Wednesday night and take a 2-0 best-of-7 series lead.
Jaylen Brown finished with 22 points (six assists), including 10 in the fourth quarter, Jayson Tatum -- who had the buzzer-beating Game 1 winning layup -- added 19 points and 10 assists. Al Horford had 16 points and Daniel Theis chipped in 15 points for Boston, who held Kevin Durant without a field goal in the second half.

"This was like an old-fashioned. old-school playoff game," Tatum said during his postgame presser. "You just have to grind it out. That's what we did... we just just stuck with it. Proud of the guys and how we kept responding all game."

Durant, who struggled again for the second straight game from the field, shot 4-of-17, but was 18-of-20 from the free throw line to score 27 points and also had six turnovers. Kyrie Irving, fresh off a $50,000 NBA fine for his Game 1 obscene gestures and profane language towards Celtics fans, had just 10 points on 4-of-13 shooting.

"They're doing a good job trying to cut off my scoring, limit my shot making," Durant said in his postgame comments. "It's on me to figure it out."

The two Nets stars combined for 1-of-17 in the second half, despite help from Boston native Bruce Brown, who had 23 points, eight rebounds, Goran Dragic, who netted 18 off the bench and Seth Curry, who contributed with 16 points on 4-of-6 from deep.

"They took the lead and they never looked back in that fourth quarter," Irving said to reporters. "We don't really have time to be disappointed, to hold our heads. This is part of playoff basketball."

The Garden faithful didn't disappoint once again, as the boos began to rain down from pregame player intros. Then the boos turned into "Kyrie sucks!" chants just moments after tip-off, the first two Nets possessions and of course the boos continued each time Irving touched the ball.
The Celtics trailed the entire first half and were down 65-55 at the break, while Brown and Tatum combined for 14 points on 5-of-14 from the floor -- but it was Grant Williams who led the team at intermission with 13 of his 17 total points.
Boston used a 26-14 run to open the third quarter to tie the game 79-79 with 3:13 left in the period, before the Nets outscored the C's 11-6 to take a 90-85 advantage into the final frame.
Payton Pritchard (scored eight of his 10 points in the fourth) hit the go head jumper as part of the Celtics' 23-4 spurt to open the quarter and never looked back, leaving the Nets scoreless in that span for over three minutes.

"I think our intensity dropped a little bit in the second half. We also didn't convert," Nets coach Steve Nash said to the media. "We had opportunities, we didn't convert."

Boston coach Ime Udoka believes that the key to making Durant uncomfortable so far in this series has been to limit his air space.

"I think we did that," Udoka said. "We want to make him work defensively and offensively have bodies on him the whole time and try to wear him down."

The Celtics now head to Brooklyn as this series shifts to Game 3 on Saturday (7:30 ET on ESPN) and Game 4 come Monday night (TBD on TNT)  at the Barclays Center.