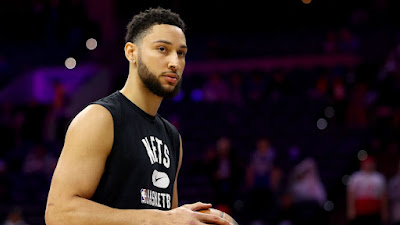 The Brooklyn Nets gave an update on Ben Simmons' status Wednesday, as he continues "progressing and moving forward," according to ESPN's Nick Friedell.
Amid his rehab for a herniated disk in his back, Simmons may be closer to possibly playing an actual NBA game sooner rather than later, but it appears to be up to the veteran guard, says coach Steve Nash.

"There's no other way than him to say, 'I'm ready,'" Nash said during Wednesday's post-practice presser. "Especially after an absence this long. So whenever he is ready, it's going to have to be on him to say, 'I feel comfortable. I feel ready to go. I want to play and I want to contribute."

"We can't push him places when you have been out this long. It's got to be something where he is definitely comfortable and ready to play."

This comes just 24 hours after Simmons was reportedly cleared for contact, as he did 4-on-4 work Monday. But, based on practices this week -- Game 4 seems like a "realistic target" for Simmons' Nets debut against the Celtics, with Game 3 also not being ruled out just yet -- per ESPN's Adrian Wojnarowski.

Game 3 hasn’t been fully ruled out yet, but that would require Simmons to clear more hurdles in a much shorter window of time, sources said.

In a separate tweet on Tuesday, Friedell posted a video of Simmons, Kevin Durant, and Kyrie Irving all getting shots up at the same time after practice for the first time since the Nets traded James Harden for Simmons at the February deadline
.

First time we’ve seen this — KD, Kyrie and Simmons all getting some shots up at the same time after practice. pic.twitter.com/n1QZLeXXBt

Nash and Brooklyn seemed adamant that Simmons may return at some point against the Celtics. Just last week ESPN's Brian Windhorst reported that Simmons was targeting within Games 4-6 to make his Nets debut, but no definite timetable had been set, only that he was "clearly" improving -- but Nash had "no idea if he's getting close to playing or not."
Simmons, who hasn't played an NBA game since June 20, 2021 when the Philadelphia 76ers were eliminated by the Atlanta Hawks, reportedly sustained the back injury last month (herniated disk) and was given an epidural in mid-March to alleviate some pain.
The Nets currently trail the Celtics 1-0 in their best-of-7 first-round series after a 115-114 loss in Game 1 on a Jayson Tatum buzzer-beating layup.
While there is still no official plans that Simmons will play in the next few days, Game 2 is set for a 7:00 ET tip-off tonight on TNT.