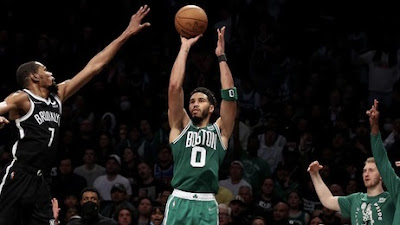 The Celtics first playoff game on the road went just as the previous two did at home, as they beat the Brooklyn Nets 109-103 in Game 3 at Barclays Center Saturday night to take a commanding 3-0 best-of-7 series lead.
Jayson Tatum led all scorers with 39 points on 13-of-29 shooting, to go along with six assists, six steals and five rebounds. Jaylen Brown added 23 points on 9-of-16 from the field and five assists.

"My message is, nobody plays harder than we do," Tatum said during his postgame presser.

Marcus Smart chipped in 14 points and six assists, while Payton Pritchard netted 10 points on 4-of-5 from the floor -- including 2-of-3 from 3 -- off the bench.
The Celtics, who forced 21 turnovers (13 steals) and converted them into 37 points, got a huge boost in their lineup with the return of Robert Williams from a partially torn meniscus in his left knee after missing the final seven games of the regular season since March 27. The big man had two points (on an alley-oop) and two rebounds in 16 minutes off the bench.
Kevin Durant continued to struggle on offense, finishing with 16 points on 11 shot attempts plus, eight rebounds, eight assists and five turnovers. After going 0-of-10 in the second half of Game 2 and 13 for 41 (31.7%) overall in the first two games in Boston with 12 turnovers, it didn't get much better for the Nets All-Star at home.

"He's had a hard time getting it going," Jaylen Brown said during his postgame comments. "We want to keep it that way because we know what he can do."

Kyrie Irving, who praised his former team, also scored 16 points on 6-of-17 from the field and 0-of-7 from 3-point territory to go along with nine assists, while also picking up five fouls.

"We know what it is," Durant said to reporters after the loss. "I don't think no speech or anything will do at this part of the year. You know what it is. We're down 3-0. We got another game on Monday. Just come out and play."

Bruce Brown recorded a playoff career-high 26 points, eight rebounds and Nic Claxton chipped in 13 points and seven rebounds off the bench for Brooklyn, who are on the brink of getting swept.
Boston led by as many as 10 before the Nets cut it to three on a Patty Mills (12 points) 3-pointer with 1:15 left in the third quarter. But Smart hit back-to-back shots and Brown's steal and a dunk made it 81-72 going into the final frame.
Smart's layup with 3:12 left to play gave the Celtics 103-88 advantage -- the largest of the night. Brooklyn used a 12-2 run in one last rally attempt, but Tatum sealed the win with a pair of made free throws and a steal on Durant that led to a monster dunk.
It was "more of the same," according to C's coach Ime Udoka, who believes that "we're making it tough" on the Nets throughout the first three games of this series so far.

"I feel like we're a complete team where a ton of guys contributed," said Udoka. "Obviously we got our two leading scorers that can do it on that end but the way they're being guarded opens things up for everybody else."

The Celtics will have an opportunity to wrap up the series Monday night, as Game 4 against the Nets is scheduled for a 7:00 ET tip-off on TNT.