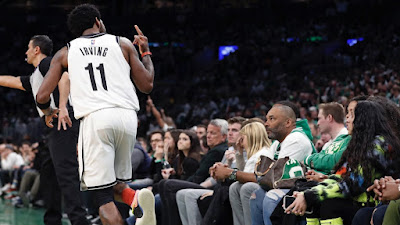 The NBA has fined Brooklyn Nets All-Star Kyrie Irving $50,000 -- the maximum allowed by the league -- for gestures and comments made towards Celtics fans in Game 1 of the first-round best-of-7 series.
There were four different moments on Sunday at TD Garden that led to the hefty fine. Irving was caught on camera flipping the middle finger to fans after hitting a fadeaway jumper over Jaylen Brown, as he got back on defense. Another instance while waiting to inbound the ball, Irving could be seen on the broadcast holding his hands behind his head and Celtics fans taunting him after the fact.

The following was released by the NBA. pic.twitter.com/KpNRX6alBg

A viral video surfaced that Irving was in fact flipping both of his middle fingers during that inbound play, despite scoring a game-high 39 points on an efficient 12-of-20 shooting, including hitting 6-of-10 from deep -- only to allow Jayson Tatum to cut towards the hoop to catch a pass from Marcus Smart in the final seconds and hit a buzzer-beating layup to give the Celtics a 115-114 win and a 1-0 series lead.
At halftime, Irving was also caught on camera saying "s--k my d--k, bitch," to a fan yelling "Kyrie you suck." Finally during his postgame presser, Irving used profanity to explain his actions during the Nets loss, to which he said "Embrace it. It's the dark side. Embrace it."

"When people start yelling p**sy and b**ch and f**k you, there's only so much you can take as a competitor," Irving explained. "Nah f**k that, that's the playoffs, it is what it is. I know what to expect in here and I'm ready to give the same energy back to them."

Well that "same energy" cost Irving $50K and better believe the Celtics fans will be more than ready with some new and even louder energy come Wednesday night at the Garden, despite Nets superstar teammate Kevin Durant saying that the hate is most likely "rooted in love."

"It's rooted in love. They once loved you, had life altering experiences coming to games watching you play," Durant said about Celtics fans' hatred towards Irving in his post-Nets practice presser Tuesday afternoon. "So when it gets ripped from them in a trade…it feels like a piece of them is gone too."