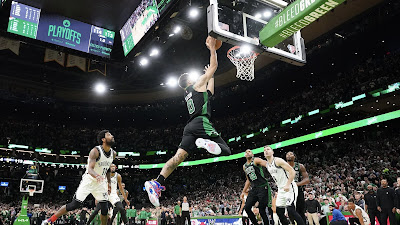 It was a wild finish Sunday afternoon at TD Garden, as Jayson Tatum hit a layup as time expired for the Celtics to escape with 115-114 Game 1 victory over the Brooklyn Nets and take a 1-0 lead in their first-round best-of-7 playoff series.
The C's All-Star, who finished with a team-high 31 points and eight assists received a pass from Marcus Smart in the closing seconds to score his first career game-winning buzzer-beater.

"When he took that dribble we just kind of made eye contact. He made a great pass," Tatum said of his teammate during his postgame presser. "It doesn't get any better than that. A buzzer-beater in a playoff game at home."

It was the franchise's first playoff buzzer beating field goal since Paul Pierce in 2010 against the Miami Heat.
Tatum's basket came after a Kevin Durant miss on the other end and a Boston rebound with just over 12 seconds left to set up the final play without a timeout being called, as they raced up the court.
Jaylen Brown dribbled towards the paint and swung it to an open Smart on the left elbow, before the guard pumped fake two Nets defenders in the air to find a cutting Tatum, who turned around and laid the ball off the backboard before the clock hit triple-zeros.

"I've always been told you have more time than you realize you have," Smart said in his postgame comments. "I was about to throw it to Al [Horford] off the dribble and I saw JT cut at the last minute."

All five Celtics players on the floor touched the ball during that final possession, as a testament to how the team has performed over the past three months -- finishing 28-7 in their last 35 regular season games.

"I think that's kind of a microcosm for our season, guys moving the ball being unselfish," C's coach Ime Udoka said.

Brown had 23 points, while Horford recorded a double-double of 20 points and 15 rebounds. Smart added 20 points, including four made 3s, to go along with seven rebounds and six assists in the win.
Kyrie Irving notched a game-high 39 points on 12-of-20 shooting (6-of-10 from deep) and dished out six assists, despite being visibly frustrated throughout the game when he flipped the middle finger toward the Garden crowd on a few occasions.

"The same energy they have for me, I'm gonna have the same energy for them. It's not every fan," Irving said in a cursed filled presser. "There's only but so much you can take a competitor."

Durant struggled from the field, only connecting on 9-of-24 attempts for 23 points, while also turning the ball six times.

"They did a good job of forcing me away, then helping in the paint. I just got to be more fundamental in my moves," Durant said to reporters following the loss. "I feel like some shots went in and out for me."

Goran Dragic added 14 points and Nic Claxton chipped in 13 points, eight rebounds off the bench for the Nets.
The Celtics used a 23-8 run to open the second half after it was all knotted up 61-61 at the half, Boston was ahead 82-69 with 6:35 left in the third quarter. Tatum's 3 made it 96-85 heading into the final frame.
Brooklyn went on a 22-6 run to start the fourth period, as the Celtics trailed 107-102 following an Irving 3-pointer with 5:30 left to play, as part of an 18-point quarter. Boston would score 13 of the next 21 points -- including a Brown 3-ball on the next play to cut it to two, before a Durant charge led to a Smart layup on the other end.
Irving's final 3 of the afternoon gave the Nets a 114-111 cushion leading to an Udoka timeout. Brown's quick two got Boston within one in the final 38 seconds. Irving couldn't get a shot off on the ensuing play as he was double-teamed and gave it up to Durant, but he missed a contested 28-foot jumper that landed in Horford's hands just prior to the final Celtics play to secure the win.

"Stayed with it, took their shot and found a way to finish the game," Horford told the media. "End of the day it's just getting the win, it doesn't matter how it was."

Horford became just the 13th player in the NBA history to record a 20-point, 15-rebound playoff game at age 35 years old.
The Celtics will look to go take a 2-0 series lead when they host the Nets Wednesday night. TNT has the tip-off at 7:00 ET.