Jaylen Brown, Marcus Smart only starters to play against Bucks 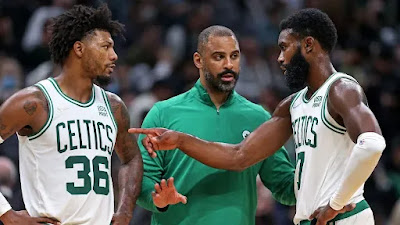 The Celtics will be without three starters Thursday when they face the Milwaukee Bucks on a second night of a back-to-back in a pivotal game for Eastern Conference seeding.
Boston currently sits in the No. 2 spot at 50-30 and are fighting for homecourt advantage in the second round of the playoffs should they beat Bucks (49-30) without Jayson Tatum (right patella tendinopathy), Al Horford (lower back soreness) and of course Robert Williams (partially torn meniscus).


Horford had a strong outing against the Chicago Bulls Wednesday night, as he recorded a double-double of 17 points and 10 rebounds, while shooting a perfect 7-of-7 from the field, including 3-of-3 from deep. Tatum, meanwhile, struggled on 5-of-18 from the floor and 1-of-8 from 3-point territory, but was two assists shy of a triple-double (16 points, 10 rebounds, eight dimes). The three-time All-Star has been playing through some recent soreness since the Celtics' win over Minnesota Timberwolves.
Marcus Smart, who was previously listed as probable due to a right ankle sprain -- an injury he appeared to reaggravate against the Indiana Pacers last week -- has been upgraded to available.
Jaylen Brown scored a team-high 25 against the Bulls and is also available after playing more minutes (35) than any starter last night and seems ready to go full force in Milwaukee.
TNT will have the tip-off tonight between the shorthanded Celtics and Bucks from Fiserv Forum at 7:30 ET.
Joel Pavón
Follow @Joe1_CSP