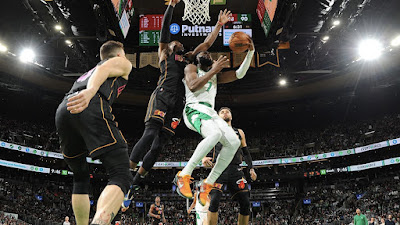 The Celtics missed an opportunity to regain the top spot in the East, after falling to the Miami Heat 106-98 Wednesday night at TD Garden.
Despite Jaylen Brown notching a double-double of 28 points, 10 rebounds, to go along with six assists and Jayson Tatum recording 23 points, six assists, Boston lost consecutive games for the first time since January 21 (against the Portland Trail Blazers).
Daniel Theis had 15 points off the bench, while Al Horford added 15 rebounds after coming back from a two-game absence for the Celtics, who are 47-30 (fourth) on the season.

"It's a good thing for us to learn from, Tatum said in his postgame presser. "The season is not decided today. We've still got games to play, playoffs. So, we'll be good."

With Robert Williams officially out for the next four to six weeks following surgery on his left knee to repair a partially torn meniscus, Boston got a boost with three returning starters but it wasn't enough down the stretch, as the C's were outscored 27-15 overall in the fourth quarter.
Jimmy Butler finished with 24 points to lead the Heat, while Kyle Lowry recorded 23 points on 8-of-16 shooting, including 6-of-12 from deep and eight assists. Bam Adebayo netted 17 points and grabbed 12 rebounds for Miami -- who improved to an Eastern Conference best record of 49-28.
The Celtics trailed 52-53 at the break before the Heat eventually were ahead by 11 to open the third quarter. Boston responded with a 16-0 run to take a 83-79 lead into the final frame.
Theis made it 90-85 with an alley-oop dunk on a lob from Derrick White with 7:40 left to play. Miami used a 12-3 spurt to grab a 98-93 advantage and the Celtics cut it to two, but that would be as close as they'd get the rest of the way -- after coming up short on three of their next possessions.
With the C's down four, Brown had his shot blocked in the paint and Lowry found a running Butler for a two-handed slam to put Miami up 102-96 with 1:43 remaining.
Boston had one more chance down 102-98, to get within two before Tatum was called for an offensive foul and despite it being challenged, the call stood. On the next trip Marcus Smart (10 points, eight assists) was ejected after a missed 3-pointer was called out of bounce and the Celtics' guard threw his hands up in frustration at the call with 10.8 seconds left only to get tossed. Miami hit free throws to win their second straight after snapping a season-high four-game skid.

"This is a good test playoff-wise," said C's coach Ime Udoka, "This is what it's going to be like coming up in a few weeks here. Every game is not going to be easy, you're not going to win every game by 20 points."

The Celtics, who ended the month of March 11-3, have five games left in the regular season before they host the Indiana Pacers (25-52) Friday night.