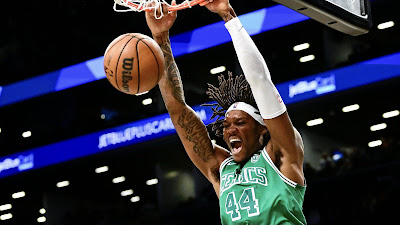 Robert Williams says surgery to repair a partially torn meniscus in his left knee went well, as he remains optimistic that a return during the playoffs is very much possible.
The Celtics starting center spoke to the media for the first time since it was reported that he'd miss anywhere from four to six weeks following a partial lateral meniscectomy.

"Honestly right now, I'm in a great place mentally," Williams told reporters Saturday while holding a basketball. "Physically, feeling way better. Just going along with the rehab, staying up for the guys, cheering them on."

Williams believes he may have sustained the injury while guarding Taurean Prince of the Minnesota Timberwolves during the Celtics 134-112 win back on March 27, but is not entirely certain when it may have actually occurred exactly. The 24-year-old only remembered that every step he took towards the bench felt worse and worse, as he was scared to stand.

"I didn't know what was wrong," Williams said, "but I knew something had happened that was going to stop me from playing."

While Williams says he has "all the faith in the world" that the Celtics medical staff have made his overall long-term health a top priority, the young big man did admit that he didn't want to get his knee looked at on Sunday after the game because he was expecting the worse, even though the doctors' initial news was a pleasant surprise.
For Williams now, he's only focused on his rehab which includes mostly stationary exercises at the moment before he expects to gradually increase to other activities in the upcoming weeks
As for any concerns about returning to the same form prior to the knee injury?

"Shit, not on my part," Williams said. "Just ready to come back."

At 48-39, the Celtics have four games remaining before the regular season comes to an end and the playoffs begin following the "Play-in" tournament.
Joel Pavón
Follow @Joe1_CSP