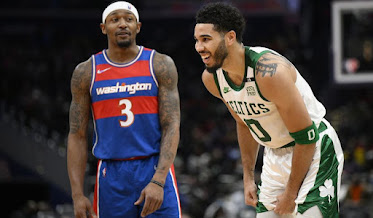 Bradley Beal continues to endorse his good friend Jayson Tatum as the future face of the NBA, despite admitting his bias.
The Wizards All-Star isn't at all surprised how Tatum made his way into the MVP conversation following the Celtics three-month turnaround. But, Beal says the forward's overall play during the 2021-22 season is just the beginning.

"I feel like he hasn't even cracked the seal of really realizing how good he can possibly be. So that's why I see it," Beal said on the recent episode of the Celtics Talk Podcast. "Granted, yes, I may sound biased. Sure, sure, whatever. But I've been saying it since he was a kid: Go be the best player to ever touch a basketball. Go do that.
"You have those intangibles, you have the skillset, right? And you have the size, right? It's just a matter of putting it all together and just really dominating. Mentally, telling yourself every night that this is my floor, I'm the best player on the floor.
"And you've seen that. He’ll crack that code every now and then, right? But the more he does it, I think he's starting to get it. I think over these last -- we'll say [since] the [All-Star] break, since then [the Celtics have] lost like, what, four games? I think he's really started to see how he can really manipulate his game. He can really be one of those guys that you fear. So the sky is the limit for him. And it's all up to Jay though."

Tatum began his second half surge with a 51-point performance against Beal and the Wizards back in a January 116-87 blowout win, while snapping out of a major shooting slump -- something Beal says it's one of the reasons the Celtics have been on a roll since, finishing 28-7 in their final 35 games.

"I would say from a leadership standpoint, right? Like he took the team on his back. From the outside looking in," said Beal. "What's wrong with Boston, right? Everything was fresh, everything was new. They had a new team, added some guys, they had a new coach, so there was a lot of things that they had to adjust to, just like several teams in the league. But I think once that clicked, Jayson realized that he had to lead, right?
"Him and Jaylen [Brown] have been thrusted in this position of leading a team, right? You have Marcus [Smart] there, who has been there, who has endured those bumps and bruises and who knows how to lead. But now it's Jayson's and Jaylen's turn to kind of endure that, projecting into what they're going to be.
So I think Jayson, for me, the difference I see is just his maturity in the game. He's more vocalized leading. He's bringing it every single night. And I think that's a testament to being really great. If you can do that every single night and you can make your teammates better, you're checking all the boxes of being a great player."

Still, Beal couldn't be more proud of Tatum and all he has accomplished in the short time with the Celtics and his NBA career. It wasn't long ago that the Wizards star began endorsing his buddy being the next big thing in the league when he made an appearance of the "Draymond Green Show" late last month.

"To see Jayson be in the situation he's in, to be in Boston, to be in a sports town, to be in basketball Mecca, essentially, there's no story better written for him. All he has to do is just embrace the atmosphere that he's been in," said Beal on Friday.

Tatum and the Celtics are set to take on the Brooklyn Nets in the best-of-7 first-round series, which tips-off Sunday afternoon at 3:30 PM ET on ABC.
Joel Pavón
Follow @Joe1_CSP