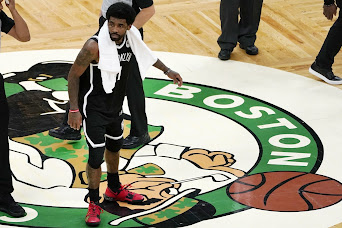 It was nearly a year ago when Kyrie Irving stomped on Lucky the leprechaun at center court in front over of 17,200-plus fans at TD Garden, as the Brooklyn Nets ultimately eliminated the Celtics from the playoffs.
Fast forward 10 months and the first-round rematch is set to tip-off this weekend, but before the Nets prepare to take on Boston once again, it appears Irving is asking for peace instead of being portrayed as the villain.
During his media availability Friday, Irving says he hopes Celtics fans can move on and remember the positives during his two years in green, despite him deciding to take his talents to Brooklyn -- when he promised to re-sign, making controversial comments about the city of Boston and of course the stomping of the team's logo while wiping his feet.

"It's been three years now," Irving said during his press conference. "Hopefully, probably by the fourth year or after this series, we can be done talking about the past time and what happened there. For me, I definitely don't want to focus on anything other than what's going on with our team. Don't want to focus on the fans; don't want to focus on any of the extra stuff outside of my control. The environment's going to be the environment. I'm looking forward to it. It's just going in there with a sharp focus, fearless attitude and just stay to our team principles, and just live with the results.

"I just hope we can move past kind of my Boston era, and just reflect on some of the highlights I left at TD Garden that they can replay. And just move forward. New paradigm, baby."

Yes, you read that correctly. The same Irving, who following a 126-120 loss to the Celtics in Boston compared fans to a "scorned girlfriend" as he heard boos and "Kyrie sucks" chants, among other things every time he touched the ball, is optimistic that maybe he'll get a tribute video at some point after this series.

"I know it's going to be like that the rest of my career coming in here," Irving said during his postgame comments back on March 6. "It's like the scorned girlfriend who wants an explanation on why I left, but still hoping for a text back. I'm just like, it was fun while it lasted."

A much different tone from Irving over a month ago, as someone that had accepted the fact that there'll probably be no love lost between him and Celtics fans for the rest of his playing days, but yet he continues to still have relationships with lots of former teammates -- including Jayson Tatum and Jaylen Brown (a surprise to many).

"Off the court, me and Kyrie might have started off with a lot of bumps in the road," Brown told NBC Sports Boston on Thursday. "But as of lately, Kyrie is somebody that I've connected with. Somebody that I call a friend, a brother. Somebody that calls me to pick my brain at this point.

"It wasn't like that when we played together. We bumped heads a lot. But it's funny now in hindsight. Kyrie, he talks to me, hits me up all the time and our relationship has grown a lot since then."

Even Tatum shared earlier this week that throughout the many conversations he has had with the fellow Duke alum, Irving has expressed regret over his tenure in Boston, according to the Celtics All-Star.

"Obviously we've talked and there's some things that he probably told me he wish he could do (or) would've done differently," Tatum said during his Wednesday presser.

Still, it's difficult to get a read on Irving these days since he rarely discusses his time with the Celtics or why he expressed that he wanted to remain in Boston and have his number retired only to bounce nine months later.
Either way, the Celtics will host Irving and the Nets in Game 1 of this best-of-7 series on Sunday at 3:30 PM ET and the Garden fans will be waiting to give their much anticipated response.
Joel Pavón
Follow @Joe1_CSP