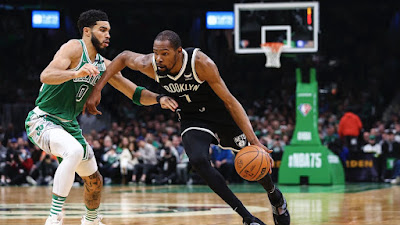 The Celtics officially know who awaits them in the first-round of the 2022 NBA Playoffs, as the Brooklyn Nets (44-38) clinched the seventh seed in the East with a 115-108 play-in win over the Cleveland Cavaliers Tuesday night.
Boston (51-31) as the No. 2 seed will host the Nets come Sunday afternoon when Game 1 of the series tips-off at 3:30 ET from TD Garden.


Former Celtic guard Kyrie Irving was a perfect 12-of-12 from the field through three quarters, before missing his first shot early in the final frame to finish with 34 points on 12-of-15 from the floor, to go along with 12 assists. Despite remaining unvaccinated, Irving was just recently cleared to play home games due to New York City lifting its COVID-19 mandates.

"I know that team very well and they know us very well and it'll be a back and forth," said Irving about the Celtics during his postgame presser. "Once you throw that ball in the air, you're going to really see some spectacular basketball."

Kevin Durant added 25 points, 11 assists, while Bruce Brown nearly recorded a triple-double with 18 points, nine rebounds and eight dimes -- relatively getting to the basket with ease and taking advantage that the Cavs were without All-Star Jarrett Allen, who suffered a fractured finger and has been sidelined since March 6.
While the Celtics haven't ruled out the possibility that Robert Williams (partially torn meniscus) could be back in the lineup before the conclusion of this series, as the schedule points out a potential Game 5 would be set for April 25 -- which would mark the end of the fourth week in the big man's original four-to-six week timeline to return from his knee surgery.
It was year ago when these two teams faced off in the first-round and Boston was sent home in five games. There were very different circumstances including the swapping of seeds (Celtics won a play-in game to clinch the No. 7 spot) and Jaylen Brown being shut down for the season after having wrist surgery prior to Game 1.
This time around the Celtics are under new direction when it comes to first-year head coach Ime Udoka and a new president of basketball operations in Brad Stevens. Mixed in, aside from familiar faces in veterans like Al Horford and Daniel Theis, plus the core of Jayson Tatum, Jaylen Brown and Marcus Smart -- is a renewed sense of pride and playing together on both ends of the floor that was clearly lacking during the 2020-21 campaign.
Meanwhile, the heavily favored Nets to start the season were rolling even without Irving, only to have him return and then trade away James Harden all in a matter of weeks. Since then, Durant missed a month, they suffered an 11-game losing streak, fell into play-in territory (never quite recovered) and have no idea when Ben Simmons plans to play, as the Celtics climbed their way from the depths of below .500 mediocrity to legit NBA Finals contenders in a matter of three months.
However, a rematch between Boston and Brooklyn is just another added chapter on how these two franchises have been connected in one way or another over the past decade. Either way, this story is must see TV and Sunday can't come soon enough.
Joel Pavón
Follow @Joe1_CSP