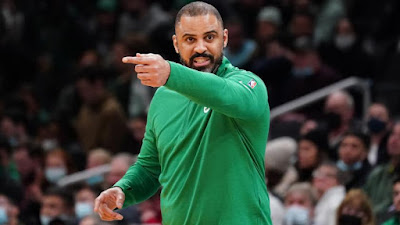 Ime Udoka has been named Eastern Conference Coach of the Month for March/April, after winning the award in February, the NBA announced Tuesday afternoon.
Udoka led the Celtics to a 15-4 record in the last seven weeks of the season to finish as the No. 2 seed in the East at 51-31 overall. Boston had the league's best defensive rating (tied with the Golden State Warriors), while completing an historic turnaround in a three-month span.


The Celtics started the 2021-22 campaign 23-24 (11th place) and once the calendar flipped to January they were off and running, going 28-7 in their final 35 games. Udoka led his team to an 11-1 start to March before injuries affected the end of the month.
Aside from being the third rookie head coach in franchise history to win at least 50 games, Udoka is the first to win back-to-back Coach of the Month honors since Doc River in 2008.
The real fun begins for Udoka and the Celtics as they look to have a deep playoff run that will get underway in the upcoming days against division rival; the Brooklyn Nets.
Joel Pavón
Follow @Joe1_CSP