Ben Simmons ruled out for Game 4 vs. Celtics 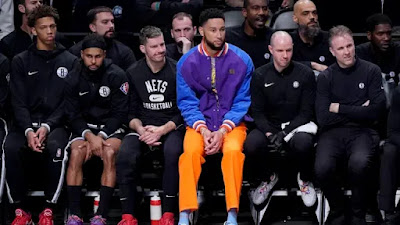 With the Brooklyn Nets on the brink of elimination, don't count Ben Simmons to come and lend his services, as the veteran point guard has officially been ruled out for Game 4.
Despite initial reports that Simmons was targeting a return against the Celtics while he was rehabbing from a herniated disk, he woke up with back soreness Sunday -- according to ESPN's Adrian Wojanarowski.

ESPN Sources: The Nets and Ben Simmons expected he would be ready to play on Monday, but after getting on the court yesterday Simmons says he awoke with back soreness today. In the end, the team and Simmons agreed he'll remain out for Game 4.


Simmons has not played an NBA game since June 20, 2021 with the Philadelphia 76ers, before requesting a trade during the summer and being moved along with Seth Curry and Andre Drummond at the February deadline for James Harden.
On Sunday, when the media walked into the Nets practice, Simmons, Kyrie Irving were nowhere to be found, while Kevin Durant was seen walking out the moment reporters entered.

No sign of Ben Simmons or Kyrie Irving. Kevin Durant walked off the floor when media came into practice. pic.twitter.com/wME4JIBBRi


The Nets will host the Celtics at Barclays Center in an elimination Game 4 Monday night, with tip-off set for 7:00 ET on TNT.
Joel Pavón
Follow @Joe1_CSP