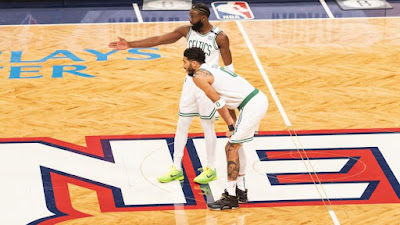 The Celtics are the first team to eliminate their first-round opponent in the 2021-22 NBA playoffs and the only roster to do it in a four-game sweep by dispatching the Brooklyn Nets Monday night.
Boston advances to the Eastern Conference semifinals while sending Kevin Durant and Kyrie Irving on an early vacation following a 116-112 series clinching Game 4 victory.
It was a season ago that these two teams met in the opening-round of the playoffs but with much different results -- C's lost in five games and changes were clearly needed.
Less than a year later, a new coach in Ime Udoka was hired to replace Brad Stevens, who was promoted to president of basketball operations and a sub .500 start eventually led to the Celtics winning 32 of their last 42 games of the regular season and the East's second best record at 51-31.
Beating the Nets in four games not only proves that this team is for real but they may have also put the rest of the league on notice.
ESPN NBA analyst Jeff Van Gundy says that is hardly a surprise for those who have been closely paying attention to the Celtics since the turn of the calendar year.

"I didn't see a sweep [against Brooklyn], but they're clearly a better team. They have been for the last three months," Van Gundy said Tuesday morning on WEEI's The Greg Hill Morning Show. "So it didn't surprise me that they were dominant, but sweeping Kevin Durant is obviously an incredible accomplishment.
"And the way they did it, they played better on offense than they did on defense at times, which is a great balance for them. They have the great defense, and to combine that with really good offense makes them what they are, which is truly a championship contender."

"Give credit to the Celtics, first off. They're an incredible team," Durant said during his post Game 4 presser. "They got a chance to do some big things the rest of the playoffs. They played amazing."

Jayson Tatum, who was one of the main Celtics guarding Durant, also turned it up a notch on the offensive end the second half of the regular season that has bled into the playoffs. The All-Star forward is currently fourth in scoring at 29.5 points per contest and fifth in playoff assists at 7.3 per game, according to NBA.com. On defense, Tatum is ranked third in steals (1.8) behind Jimmy Butler (2.8) and teammate Jaylen Brown (2.5).

"He's improved from being a dominant scorer to being the best player on what could be the best team," Van Gundy said of Tatum. "Because he is now passing the ball consistently, making the right plays, which engenders unselfishness for the whole team. And then defensively, he's been awesome. His commitment to the defensive end of the floor and his actual defensive skill and anticipation is off the charts."

While many of the talking heads around the basketball world have focused more on what went wrong for the Nets, versus what the Celtics did to beat them, Van Gundy believes Boston is the team to fear in the East.

"At the end of the day, Boston's just better," he said. "They play better. They're better constructed from a roster standpoint. With all the talk about what Brooklyn didn't do, it diminishes just what Boston did do. Boston's just a better team."

The Celtics await the winner between the Milwaukee Bucks and Chicago Bulls as their second-round opponent, which could come as soon as Wednesday night, as the reigning champs have a chance to close out their best-of-7 series with a 3-1 lead.